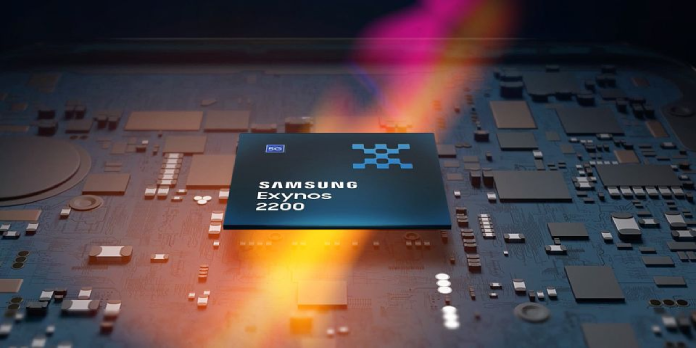 Samsung just revealed the Exynos 2200 smartphone processor, including an AMD-designed GPU. Unfortunately, however, the chip is already at a significant disadvantage. Samsung had been criticized for its Exynos series, but after a great showing last year, the business turned things around, and its Exynos 2100 now competes well with Qualcomm’s Snapdragon 888. In addition, each year brings fresh advancements, and Samsung’s newest chip promises even faster performance, especially in graphics processing.

Samsung has been making its mobile processors for a long time. Still, these chips are not sold in the United States, likely due to licensing limitations as part of its cellular technology contract with Qualcomm. Qualcomm owns many patents, most notably for CDMA, the cellular protocol that underpins both 2G and 3G communications.

Also See:  Is Your Master Boot Record Missing? Here’s What to Do

Samsung recently unveiled their Exynos 2200 processor, which includes AMD GPU technology. According to the maker of the Galaxy S and Z series phones, this new technology will deliver console-quality visuals to mobile gaming. While there are few specifics about the GPU, it should be a significant upgrade because ray tracing is one of the top capabilities stated. Because it simulates the actual physics of light beams and how they reflect and scatter off surfaces, ray tracing usually produces considerably more realistic visuals. As great as this is, one must question how many times this capacity will be utilized.

Limitations of the Samsung Exynos 2200

The Samsung Exynos 2200 appears to be a fantastic mobile processor, possibly even better than Qualcomm’s Snapdragon 8 Gen 1 chip. That won’t be known for sure until both are accessible on mobile phones and can be pitted against each other in benchmark and gaming tests. Even if Samsung defeats Qualcomm by achieving ray-tracing quality at fast enough frame rates without depleting battery life, US consumers are unlikely to order a phone with this technology. Qualcomm-powered phones are sent to the United States by Samsung.

Another drawback of the Exynos is that game creators may be tempted to go for the middle ground instead of optimizing games for Samsung’s Xclipse ray-tracing capabilities because of the split focus. Undoubtedly, some of the most popular games will try to take advantage of at least some of these features, and PUBG: New State was featured on the announcement page. Samsung can create incredible technology, but even the best mobile graphics processor in the world won’t help if games and apps don’t make use of its advanced features.

PS5 Restock At Target Rumored For This Week