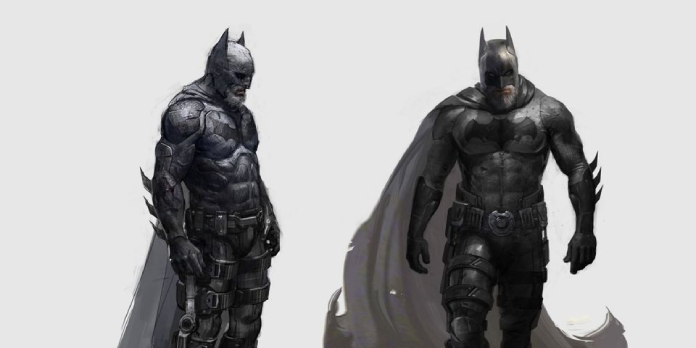 An older Bruce Wayne and Damian Wayne wear a Batman Beyond-style Batsuit in concept art from WB Games Montréal’s canceled Batman: Arkham Knight sequel. After completing the “A Matter of Family” DLC for Arkham Knight, Arkham Origins developer WB Games Montréal began work on a Damian Wayne-starring Batman game. The game, however, never saw the light of day and was never officially announced by publisher WB Games. As a result, we only know about it because of leaked details and concept drawings.

According to reports, the Damian Wayne title took precedence, forcing the team to hold its long-rumored Suicide Squad project. According to leaked material, the Damian game would have soft reset the Arkham story while also functioning as a sequel to Arkham Knight, similar to how God of War 2018 and God of War 3 relate. Plans for a trilogy were said to be contingent on future success, with Damian having precedence over a Terry McGinnis (Batman Beyond) trilogy due to the perceived ease of selling Bruce’s son as the new Dark Knight. Still, the overall story would have followed the McGinnis-centered Batman stories, with Alfred dead and Bruce taking on the role of an older mentor who rarely leaves the Batcave. But, of course, this particular experience never saw the light of day.

Newly released concept art for the aborted Batman: Arkham Knight sequel from the Montréal company adds validity to 2016 leaks that indicated the Batman Beyond inspiration. Concept Artist Goran Bukvic’s painting features Damian Wayne’s Caped Crusader with a Batman Beyond-style outfit, according to the Twitter user The Arkham Channel. The Damian suit has a small red Bat-Symbol emblazoned across the chest, similar to McGinnis’ iconic Batsuit. Other artwork in the post depicts a much older and bearded Bruce Wayne clothed in a Batsuit that appears to be based on the Arkham games with Christian Bale’s Bat’s cowl. There are also a few more revised Batcycle images. Project Sabbath was the codename for the shelved game, according to reports.

"Project Sabbath", a canceled Damian Wayne Batman game at WB Games Montreal, apparently has another wave of concept art revealed – this time by concept artist Goran Bukvic. The images match how the game was first described years ago.

The following concept art appears to validate leaks from five years ago that suggested a Batman Beyond-style scenario starring Damian Wayne and an elderly Bruce. The reason behind the failure of the Batman: Arkham Knight sequel remains a mystery, one that may not be solved anytime soon.

At the very least, the Arkham story is continued in Rocksteady Games’ Suicide Squad: Kill the Justice League, though Batman’s role in the plot, if any, is unknown. Even though WB Games Montréal’s Gotham Knights isn’t based in the Arkhamverse, it will nevertheless pay homage to Batman’s legacy.