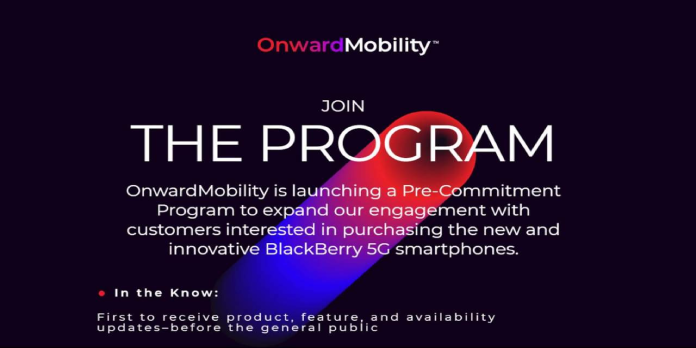 BlackBerry has been quiet for a while. The company stopped manufacturing its smartphones and began licensing its brand to other smartphone makers, such as TCL. TCL ended its line of BlackBerry-branded smartphones, so news on this front is also dead. The iconic brand’s fans might still have some hope, mainly since another licensee has spoken out to show that a 5G-capable BlackBerry smartphone is still in development, even though a launch date is not yet set.

OnwardMobility, a Texas-based company, announced that it had licensed the brand to make the first 5G BlackBerry smartphone almost one year ago. The goal was to launch the phone in the first half of 2021. Although that target was not met, the company is determined to show it isn’t giving up just yet.

It isn’t offering any more hope than it did before. Instead, it has launched a “Precommitment Program” to allow those genuinely interested in seeing such a phone manufactured. It is a program that promises early access to information about the phone and also provides input for the product’s design.

Also See:  How to add pronouns to your Instagram profile on iOS and Android

It doesn’t commit to a new launch date, and the company is likely being cautious about making promises it won’t be able to keep. The phone doesn’t have any teaser information, such as a traditional BlackBerry QWERTY keyboard. It raises questions about whether OnwardMobility has any product in development at this time, mainly since it was supposed that the phone would launch in months.

At this moment, the fate of BlackBerry is hanging in the balance. The name could fade into insignificance within a year if there are no new licensees. While there are still many fans of the QWERTY phone design, those numbers could be decreasing as more BlackBerry phones become available.

Samsung and AMD are working on an Exynos mobile chip with...