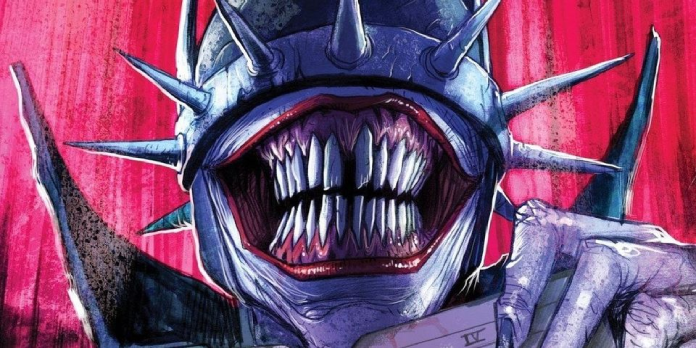 Fortnite has released a playable guest character skin based on The Batman Who Laughs, just in time for the upcoming Batman/Fortnite: Foundation crossover.

Fortnite is teaming up with DC Comics once again for a new playable skin inspired on The Batman Who Laughs, one of DC’s darkest characters in recent memory. Over the years, DC’s renowned pantheon of heroes and villains have made appearances in Epic Games’ massively multiplayer battle royale sandbox. Batman is ready to engage in a deadly game of Fortnite for the second time in the pages of the upcoming Batman/Fortnite: Foundation crossover comic.

Throughout Batman’s nearly eight decades of publishing, there have been various wicked incarnations of Bruce Wayne and his heroic alter-ego. Still, few have been as twisted and sinister as The Batman Who Laughs. The Batman Who Laughs is the Earth-22 version of Bruce Wayne. He was exposed to the Joker’s mind-alerting Joker Gas after eventually breaching his most precious rule and slaying the Clown Prince Of Crime during their final battle in the 2017 DC Black Label event Dark Knights: Metal. This transforms the Dark Knight’s mind into a mirror image of his greatest foe, combining the former’s intelligence and physical prowess with the latter’s pure lunacy and nihilistic outlook. The Batman Who Laughs would conquer his home realm’s Earth before crossing over into the main DC universe, where he immediately became a famous villain among readers and was even featured as an alternate character skin in Mortal Kombat 11. Now, just in time for today’s DC Fandome Livestream event, his reign of evil has moved to Fortnite.

According to GameSpot, when Batman/Fortnite: Foundation #1 hits newsstands and digital comic shops on October 26, players will receive a free playable skin of The Batman Who Laughs. This skin, as well as a scythe-like melee weapon and the bat wing-style Robin’s Perch back bling, will be available in the Fortnite Item Shop on that day.

As previously stated, the release of Fortnite’s latest DC guest character skin coincides with today’s DC Fandome event Livestream, a four-hour celebration of all things DC that promises a closer look at two highly anticipated DC video games: WB Montreal’s Gotham Knights and Rocksteady’s Suicide Squad: Kill The Justice League. Even in the days leading up to the big event, the creators of these thrilling games have dropped hints and snippets about what fans can expect, including the first official screenshot of Suicide Squad: Kill The Justice League. In addition, to advertise the Gotham Knights’ presence at DC Fandome, fans have been getting a unique gift box that includes a collectable mask modelled after the ominous Court Of Owls and a newspaper detailing Bruce Wayne’s death.

Also See:  How to Calibrate Your Phone's Battery to Correct Inaccurate Charge Percentages

Because The Batman Who Laughs is expected to play a key role in the upcoming Batman/Fortnite: Foundation, it’s only natural that Fortnite would make him a playable skin to coincide with the event. When the Batman Who Laughs skin and cosmetic items are launched accompanying Batman/Fortnite: Foundation #1 on October 26, players will be able to strike dread and terror as this twisted version of the Dark Knight.

According to Rockstar Games Co-Founder, GTA 6 may be less edgy