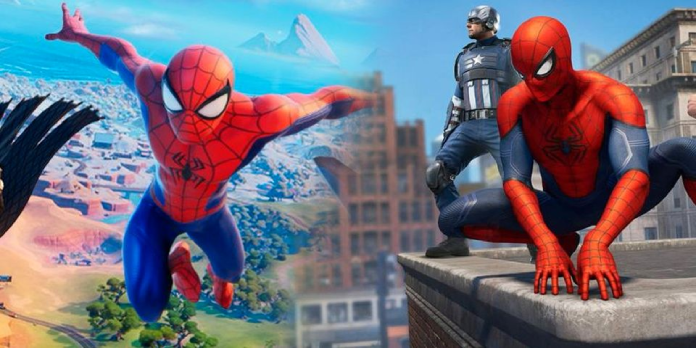 With the ability to swing through Fortnite‘s new island as Spider-Man, some fans see parallels between the new Epic Games hero and Spider-Man from Marvel’s Avengers. Fortnite’s third chapter has arrived, bringing new game mechanics and confirming Spider- Man’s inclusion in the battle royale. Tornadoes, thunderstorms, and other weather events are randomly happening throughout the island for players to experience.

Spider-Man’s inclusion in Fortnite Chapter 3 was revealed ahead of time, with the character joining Carnage and Venom, who was introduced near the end of Chapter 2. Based on several Easter eggs scattered around the new area, more of Spider-Man’s allies and opponents may be on the way, with Spidey’s specific position in the game yet to be revealed. Before his confirmation as The Foundation in the Chapter 2 finale teaser, Dwayne “The Rock” Johnson’s involvement in Fortnite was also leaked. Long before the disclosure, people assumed that the box office star was Fortnite’s The Foundation.

YassinLNey, a Twitter user, released a video of Fornite’s Spider-Man web-slinging utilising the new Web-Shooters. YassinLNey’s character is seen dramatically swinging over the air using numerous objects with a surprising level of flexibility in the video, dressed as the masked hero. Fans immediately compared the web-swinging to the Spider-Man from Marvel’s Avengers. Several users claimed that Epic’s Spider-Man has superior animations and mobility than the Spider-Man from Crystal Dynamics’ Marvel’s Avengers. “You can’t justify the god awful web-swinging in Marvel’s Avengers after Fortnite did such a terrific job,” KillerTacos54 tweeted, while ltburns108 wondered, “How can Fortnite have a better Spiderman than Avengers?”

After Fortnite did such a great job, you can't defend the god awful web swinging in Marvel's Avengers. Not only do these webs stick to buildings, but it actually has momentum. You know what, good job Fortnite. I can't believe I'm saying this, but maybe I've been too hard on you

Dam this looks good. How does Fortnite have better a better spiderman than avengers?

Part of the similarities between Fortnite’s Spider-Man and Marvel’s Avengers is that they were released so close together. In November, Marvel’s Avengers included Spider-Man as a PlayStation-exclusive hero, drawing comparisons to Insomniac Games’ Marvel’s Spider-Man franchise. When comparing the two versions of Peter in Spider-Man on PS4 and his other universe incarnation in Avengers, it’s plain to observe how much more fluid and lithe Peter is in Spider-Man on PS4, even if Insomniac lauded the overall aesthetic of the wall-crawler. However, the same could be said about Fornite and Avengers. In the former, players will sprint along the ground and perform acrobatics while attached to an actual object in the environment; in the latter, they will twist and tie webs to an invisible point in the air. It’s more reminiscent of Andrew Garfield’s time as Spider-Man in the Amazing Spider-Man games during the original Spider-Man movie reboot.

Fortnite’s Spider-Man animations have given players hope for the upcoming action-packed new chapter, and there’s still lots more to come. The new content has already made an impression, not only with Spider-Man but also with The Rock and a completely revamped map. According to Epic Games, Fortnite Season 3 had the most number of players log in on the opening day of the new season in the game’s history, and the free-to-play shooter’s future seems bright.

How to Play Wii and GameCube Games on your PC with...