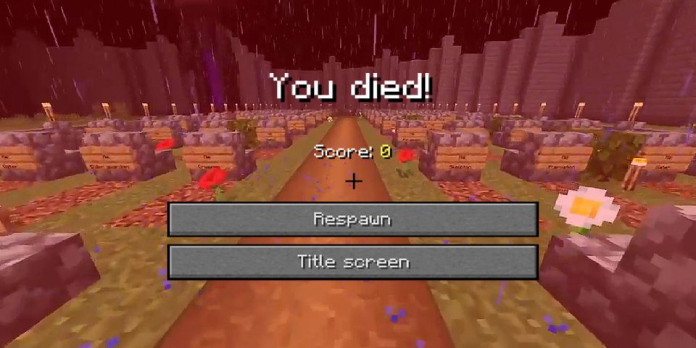 A Minecraft player has shared their project of creating a cemetery with gravestones for each time they’ve died in their world.

Every time a player’s character dies in the game, a Minecraft player has devised a plan to construct a grave. In Minecraft’s Survival and Adventure modes, there are numerous ways for player characters to die. The variety of probable causes of death varies, ranging from falls and fire damage to being slain by a monster. Random Minecraft flaws can cause players to die in rare situations, adding an undesirable and unforeseen wrinkle to an already dangerous game.

Minecraft is still one of the most popular games globally, with almost 140 million monthly active players despite being over a decade old. The degree of creativity that players may express in the sandbox game contributes significantly to its appeal. The tools available allow players to construct practically anything they can think, from fancy palaces and castles to pop culture-inspired structures. Aside from the official content expansions that the game continues to receive regularly, such as Minecraft’s impending The Wild update, players can use a plethora of mods and tools to enhance their gaming experience.

Rt22275rt posted a video of themselves strolling through a cemetery packed with their tombs on the Minecraft subreddit, demonstrating their graveyard project. There are a lot of plots in the area, indicating that Rt22275rt has died quite a few times. Rt22275rt says they’ve had the world for a while and have been playing on it for a few years, so the big number of graves is understandable. Rt22275rt has also written the reason for their deaths on each gravestone, which may be a fun reminder of the various dangers players may face in the game.

Every time I have died in my world, I have added a gravestone to my graveyard from Minecraft

Unfortunately, in response to a comment about the idea, Rt22275rt discloses that they could not put a date on each of their deaths, which may be tough to apply today, many years later. However, nothing prevents them from marking future burials. Many additional comments indicated their wish to emulate Rt22275rt’s suggestion, while one pointed out that permadeath is also used by individuals who play on Minecraft hardcore multiplayer servers.

Also See:  How to Record a Video of Your Chrome Browser

Creating a graveyard for every death one experiences in Minecraft is an intriguing concept, and it’s also a fun method to keep track of and reflect on all of the adventures one has had in their virtual world. It’s just one of the many innovative solutions that Minecraft gamers have developed to improve their own gaming experiences.

Minecraft may be played on the Nintendo Switch, PC, PlayStation 4, Xbox One, Android, and iOS.