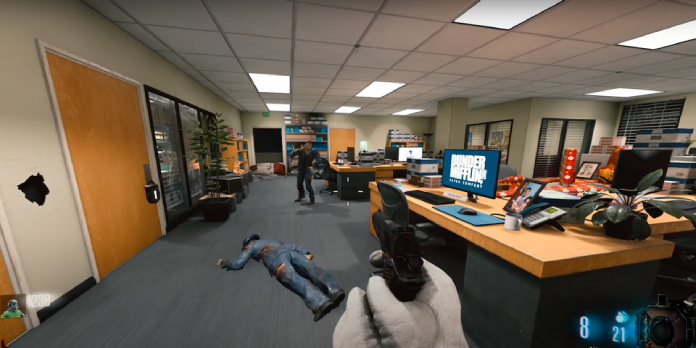 The corridors and cubicles of Dunder Mifflin in The Office become the idea for a bespoke Call of Duty Zombies map in an apocalyptic crossover.

Players can fight for their lives against the undead in the hallways of Dunder Mifflin from The Office in a terrific custom Call of Duty Zombies map. Call of Duty: World at War launched the franchise’s cooperative survival horde mode in 2008, and it has since become a hallmark of the first-person shooter series. This year, Call of Duty: Vanguard brought back Zombies, with Treyarch, the creator of World at War, again taking the reins on the horror-themed horde mode.

The Call of Duty brand centred on single-player narrative storylines and competitive multiplayer shootouts before World at War. The Zombies supernatural survival mode gave the hardcore military shooter series a whole new look, and its wave-based cooperative nature brought more variety to the action. Since World War, Treyarch has incorporated the Zombies mode in every Call of Duty release, including Black Ops and Black Ops Cold War. Treyarch has also provided post-launch updates for each game’s Zombies mode, such as new maps and weapons, with Black Ops Cold War’s final Zombies level releasing in October, just before Vanguard’s release.

Fans have built a custom Call of Duty Zombies map inspired by The Office, according to GGRecon, in an unexpected post-apocalyptic crossover. The Dunder Mifflin map is present in Call of Duty: Black Ops III’s Zombies mode and features various Easter eggs based on the iconic mockumentary comedy. Logistical Edits created it. Players can battle the undead in a realistic recreation of the fictional workplace, complete with references such as Kevin’s spilled chili and a slew of Dundie awards after spawning in the rear corner of the office. The custom map is available on the Steam Workshop for those who wish to turn Call of Duty: Black Ops III into a post-apocalyptic paper company simulator.

Call of Duty: Vanguard, the newest instalment in the popular first-person shooter game, brings back Zombies mode in a great manner. Shi No Numa, a Zombies level from World at War, was brought back in Call of Duty: Vanguard, and the game’s new map Der Anfang offers several new features, such as demonic fountain benefits. Treyarch directly led the development and improvement of past iterations of the wave-based struggle against evil. Upon release, the title’s fresh take on the demonic mode got high reviews. Vanguard is significantly more frantic and in-depth than previous entries because Der Anfang combines round-based survival with objective-based gameplay.

Logistical Edits’ Dunder Mifflin Zombies map is much better than the sum of its parts, combining a renowned first-person shooter franchise with a tremendously popular comedy. The new map faithfully recreates the show’s iconic set, and the level’s cubicles and halls make for an intense survival environment. Many fans are accustomed to seeing Dunder Mifflin on television, but Steam Workshop users can now play The Office’s renowned location in a Call of Duty Zombies framework.