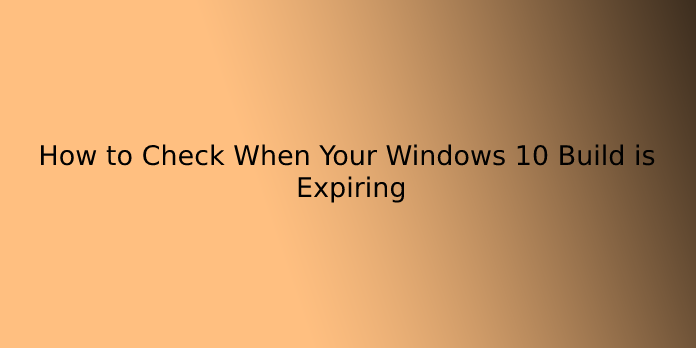 Here we can see, “How to Check When Your Windows 10 Build is Expiring”

In recent years, Microsoft has undergone significant transformations. People used to refer to Windows by their versions, such as Windows 7 or Windows 8.

However, Microsoft has stated that Windows 10 is here to stay. They will only release two major builds per year.

Windows now use build numbers to identify which update you’re using. Insider Preview Builds have an expiration date built in to keep Insiders up to date with new releases.

A setting, also known as a “time bomb,” requires you to install the most recent build before the expiration date. Windows 10 will not reboot if this is not done.

Also See:  How to Find or Create an RSS Feed for Any Website

What happens when a Windows 10 Build expires?

Insider Preview builds are created for testing purposes, and Microsoft will remove the unstable versions once all bugs have been resolved. Stable versions will not stop working and do not have an expiration date, allowing you to use them indefinitely.

Microsoft claims that two weeks after your build expires, Windows will no longer boot. Instead, you’ll see the “Recovery” screen, which will display messages like “Your PC/Device needs to be repaired” and “A component of the operating system has expired.”

You’ll have to reinstall or clean install a newer Windows 10 build or an older stable version to get your computer working again.

How to check when my Windows 10 Build is expiring

Having an expired Windows 10 build can aggravate, especially if you have to reboot frequently. It means you might not work as efficiently as usual, and you might lose some of your files.

To be safe, use our guide on finding out when your Windows 10 build expires to avoid any problems.

You’ll be able to see your Windows 10 build number and version. You’ll also see an expiration date, which indicates when you need to update to a newer version of Windows 10.

Also See:  How to: Fix Trial Period for This App Has Expired in Windows 10

The build number can also be found in the Settings app. However, there is no mention of the expiration date.

Data loss or driver incompatibilities can occur when installing new updates. Auslogics Driver Updater scans your computer and detects driver issues for complete peace of mind. After that, the software allows you to update the drivers to the most recent manufacturer version with a single click.

Furthermore, Driver Updater ensures that your device runs smoothly and creates backups before installing new updates. If the new version starts to behave badly, you can reinstall the previous version.

No, Windows 10 is a perpetual licence, which means you can upgrade to it and use it indefinitely without it expiring or going into a limited mode of operation.

Retail and OEM licences for Windows 10 (the ones that come preloaded on name-brand machines) never expire. Either a scam pop-up appeared on your screen, or your computer was loaded with a volume licence for a large organisation or an Insider Preview version of Windows 10.

4.”Your Windows License Is About To Expire.” What are your options for resolving this issue?

"Your Windows License Will Expire Soon". How do you fix this error? from Windows10

WINDOWS BUILT IS ABOUT TO EXPIRE from windowsinsiders

How to: Fix Windows 10 Won’t Let Me Adjust Screen Resolution