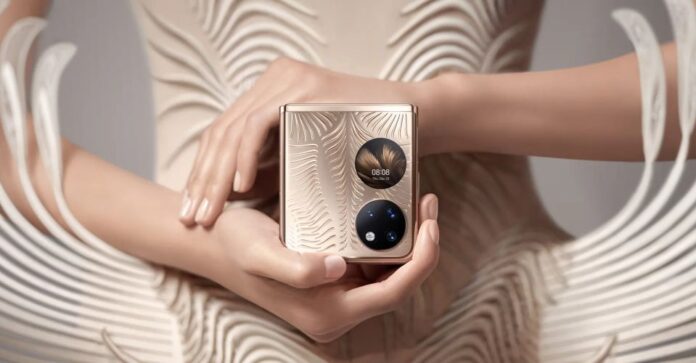 Huawei’s P50 Pocket is a foldable phone with premium specs and features that wouldn’t seem inappropriate in a jewellery store.

Huawei just announced the P50 Pocket, a new foldable smartphone with one of the most attractive and unique looks on the market. While Huawei produces some truly amazing technology, its most recent phone is presently only accessible in China and is unlikely to be released in the United States.

Huawei smartphones surpassed Apple to become the world’s second most popular smartphone brand a few years ago, with only Samsung surpassing it. Unfortunately, security worries sparked controversy in 2018, resulting in prohibitions and limitations needing a special license for US corporations to do business with Huawei. As a result, Huawei phones do not have access to the Google Play store, and the company instead installs its proprietary HarmonyOS instead of Android.

Although Huawei’s P50 Pocket will not be available in the United States, it’s still exciting to see the new technologies and the wacky design of this one-of-a-kind handset. Smartphones and smartwatches have evolved into fashion statements, and the industry is noticing. Apple has always viewed the Apple Watch as a fashion item, while Samsung’s S21 series beautifully integrated the formerly uncomfortable camera array into the phone’s appearance. Huawei’s P50 Pocket design now seems more like something you’d find at a jewellery store than a smartphone store. See the glittering gold pattern shimmer across the surface in the new YouTube video.

Specifications for the Huawei P50 Pocket

The Huawei P50 Pocket is more than just a show-stopper in looks; it’s packed with the technology you’d expect from a flagship phone, with no compromises made due to its folding nature. The phone has two displays: a 6.9-inch foldable main screen and a circular 1-inch cover screen that may be utilized in various ways. Despite its unique form, the cover screen is useful for rapidly checking alerts, directions or capturing a selfie with the rear camera. The primary display is a 120-Hz OLED with a great, sharp resolution.

Due to U.S. constraints on 5G-capable modem technology, the processor is Qualcomm’s Snapdragon 888, a 4G model. A 40-megapixel wide-angle camera, a 13-megapixel ultra-wide camera, and a 32-megapixel ‘Spectrum’ camera that reportedly captures ‘unseen hues’ are among the rear cameras. The only thing missing is a telephoto camera with a macro setting that allows photographs to be taken within one inch. The folding mechanism has no gaps near the hinge, and if it holds up over time, it might be a step forward from Samsung’s flexible screen technology. Huawei’s P50 Pocket could be the most stylish foldable device yet.