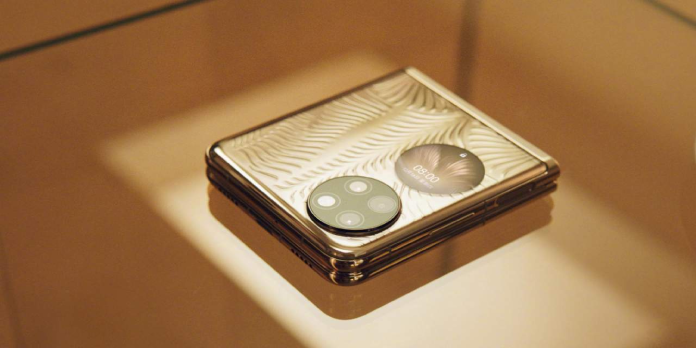 Although the event is still a week away, Huawei has already begun to tease its upcoming foldable phone, and it doesn’t appear to be worried about subtlety. The Pocket will certainly be a foldable phone with a clamshell design, competing with Samsung’s Galaxy Z Flip and Motorola’s Razr. Unlike those two variants, though, Huawei appears to be unconcerned about the P50 Pocket’s size, and the device may resemble a P50 folded in half.

As you can see in our review, the Galaxy Z Flip 3 was designed to be tiny and pocket-sized even when unfurled. With its 22:9 screen aspect ratio, the result is a phone with a familiar “candy bar” form factor, though it is narrower and taller than ordinary non-foldable phones. For example, Sony’s most recent Xperia phones have previously been mocked for their large or tall 21:9 screens.

According to marketing photographs posted on Weibo by fashion magazine Harper’s Bazaar China, the Huawei P50 Pocket appears to be headed in a somewhat different path in terms of style and size. Even without all of the details, one feature of the foldable phone leaps out right away: everything about this ostensibly pocket-sized smartphone is large.

The Huawei P50 Pocket appears to be larger than any foldable clamshell we’ve seen so far in the hands of actress Guan Xiaotong. It appears larger than the folding compact mirrors that people keep in their day bags. This means that when the phone is fully opened, it will be even larger, possibly even larger than the Huawei P50 Pro. In actuality, Display Supply Chain Consultants’ Ross Young states that the Pocket’s internal flexible screen measures 6.85 inches. The P50 Pro, on the other hand, has a 6.6-inch display.

The external screen on the Huawei P50 Pocket’s back, which is reported to have a 1-inch diameter, is another symbolically large feature. Although it is smaller than the cover screen on the Galaxy Z Flip 3, it is also unusual because it takes on a circular shape. In effect, it’s like placing a Huawei Watch on the back of the P50 Pocket, and it won’t surprise us if it acts and looks like one, complete with watch faces.

The Huawei P50 Pocket’s specifications are unknown. However, it’s safe to assume it’ll have hardware identical to the Huawei P50. According to the pictures, the foldable could use the same triple camera setup as the smartphone, including a periscope-style telephoto lens. According to these photographs and Huawei’s teaser, the phone will come in a variety of opulent patterns and hues, distinguishing it as a fashion item rather than merely a foldable phone.