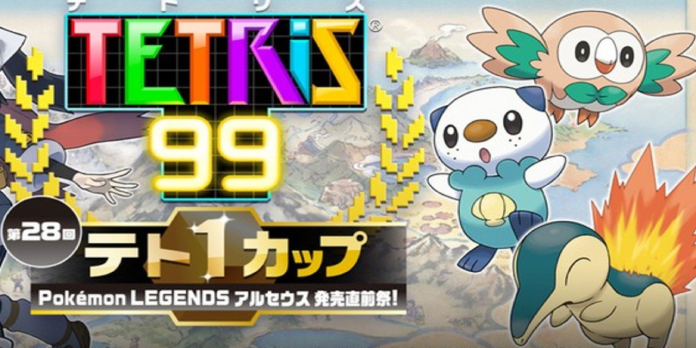 Nintendo has announced that a Pokémon Legends: Arceus event will be coming to Tetris 99 in January, bringing a new theme and soundtrack.

Pokémon Legends: Arceus is a significant deviation from the regular Pokémon games in terms of the format. It took place in the distant past of the Sinnoh area when it was known as the Hisui region. Wild Pokémon wander the fields uncontrolled, and the earth is untamed. The player joins the Galaxy Expedition Team to explore and settle the Hisui region in Pokémon Legends: Arceus. The game blends features of the Monster Hunter series and The Legend of Zelda: Breath of the Wild with the Pokémon formula. The player explores the wild frontier and fights gigantic, monstrous Pokémon.

The player will earn points by competing in Tetris 99 matches during the event. The higher a player finishes in a match, the more points they will get. If the player achieves 100 points throughout the event, they will be able to unlock the theme and keep it once the event is over. Because players can still gain a few points even if they finish last, the theme can be won through a battle of attrition if the player has free time throughout the event to devote to the game.

Also See:  "Reset This PC" in Windows 10 has gotten much more powerful

China cracks down on video games with strict playtime limits for...