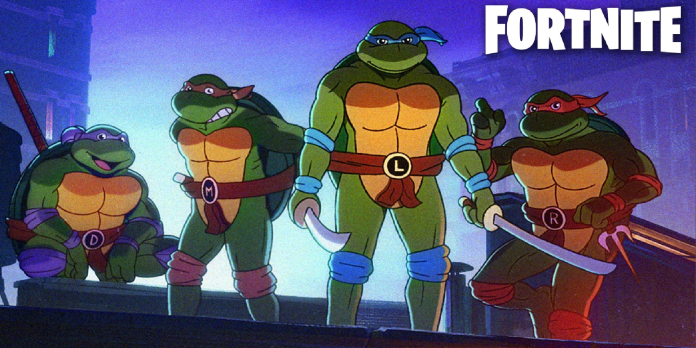 According to a new leak, Epic Games has reached an agreement with Paramount Pictures to introduce the Teenage Mutant Ninja Turtles to Fortnite later this year.

The Teenage Mutant Ninja Turtles could be among Fortnite’s next set of guest characters. From Star Wars’ resident bounty hunter Boba Fett to Marvel Comics’ friendly neighborhood Spider-Man, Epic’s enormously successful online multiplayer battle royale title has had plenty of guest appearances from across gaming, comics, television, and movies over the years. Skins from the hit Netflix series Cobra Kai, which aired its fourth season on December 31, were the most recent wave of Fortnite crossover content.

Meanwhile, when it comes to tie-in video games, the Teenage Mutant Ninja Turtles have always been a force to be reckoned with, and the last few years have been no exception. When Nickelodeon All-Star Brawl debuted in October, it featured many 90s-era kids show icons, including Leonardo, Donatello, and April O’Neal, and the pizza-eating Heroes In A Half-Shell are set to return to their side-scrolling beat-em-up roots in Teenage Mutant Ninja Turtles: Shredder’s Revenge later this year. Before then, if a new leak is to be believed, the mean, green teen team of Leo, Donnie, Mikey, and Raph could be partying their way onto Fortnite.

According to Shepshal Nick of the XboxEra podcast (via The Gamer), Paramount (the current owner of the Teenage Mutant Ninja Turtles franchise) has struck a deal with Epic Games to integrate some of its characters into Fortnite. The Turtles themselves are reported to be the initial wave of these characters, but Nick suggested that since he originally heard of this news while discussing the upcoming live-action Halo series on Paramount+, a new Master Chief could be headed to Fortnite as well.

In December, Fortnite released Chapter 3, which brought the aforementioned Spider-Man to the Island, as well as Dwayne “The Rock” Johnson’s The Foundation, a slew of new features, and a fully rebuilt game map. According to recent rumors, Epic may add a “No Build” mode to Fortnite in 2022, which will remove the game’s iconic base-building elements and give players a more traditional battle royale experience. Meanwhile, players have discovered Easter Eggs indicating that other Marvel characters, such as the X-Men and Spider-famed Man’s enemy, the Green Goblin, would be joining the fun in Fortnite.

While Paramount’s rumored contract with Epic Games to allow its characters to appear as guest characters in Fortnite has yet to be confirmed, the crazy and colorful environment of Fortnite would certainly be a wonderful fit for the fun-loving and high-flying Teenage Mutant Ninja Turtles. Outside of the brothers, the TMNT franchise has a plethora of interesting characters Epic could mine for new playable Fortnite skins, ranging from classic fan favorites like Casey Jones and The Shredder to more modern characters like Alopex and Jennika. Of course, fans will have to wait for more information about the Teenage Mutant Ninja Turtles arriving in Fortnite, but the timing couldn’t be better with The Shredder’s Revenge releasing later this year.