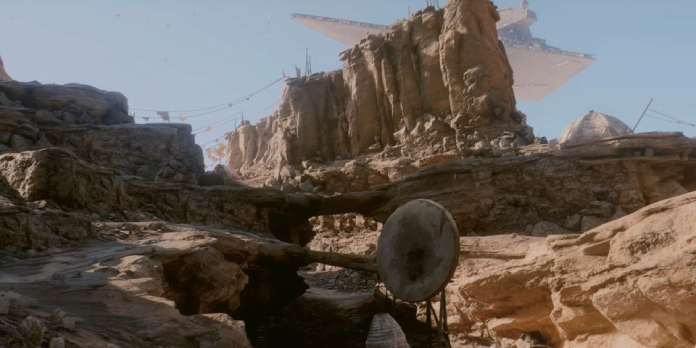 A Star Wars Battlefront mod overhauls the game’s graphics, including ray tracing and textures with an 8K resolution, among other things. The 2015 game was not as popular as EA had intended, but its sequel, Star Wars Battlefront 2, had 19 million players by the beginning of 2021, thanks to Epic Games Store offers. In addition, the sequel added a storyline and new multiplayer components, making it a complete package in the eyes of fans and critics alike. However, it was widely panned upon release for its excessive reliance on microtransactions.

Following Disney’s acquisition of Lucasfilm, publisher EA had exclusive rights to make Star Wars video games. However, this is no longer the case. While the publisher plans to continue working with Disney on future games, other developers can create games based on the legendary sci-fi genre and other Lucasfilm IPs like Indiana Jones. Since then, Ubisoft has revealed an open-world Star Wars game, which Massive Entertainment, the studio behind The Division, is working on.

AD Massicuro, a popular modder, is working on a new Star Wars Battlefront mod pack that includes ray tracing and 8K textures. Installing the mod adds more accurate reflections, more detailed sceneries and models, and new particle effects, according to AD Massicuro, who posted a new video on YouTube illustrating the enhancements in the Star Wars Battlefront “remaster.” The ultimate result almost seems like a completely new game, exceeding the product that was first launched in 2015. The mod is currently unavailable, but Massicuro intends to finish it and distribute it publicly shortly.

While Ubisoft’s Star Wars Battlefront seems brand new in the above video, Ubisoft isn’t the only publisher working on Star Wars games right now. Aspyr Media is working on a next-generation remake of Star Wars: Knights of the Old Republic for PlayStation platforms and PC. The game, announced during the PlayStation Showcase 2021, is a full remake rather than a remaster and will have new features, visuals, and fresh content. According to rumors, the game will employ a more action-oriented combat system than the original, although it’s hard to imagine it will be as action-packed as Battlefront.

Also See:  How To Turn Off Read Receipts On iPhone: The Real Fix!

Although Star Wars Battlefront isn’t a particularly old game, it’s impressive to see how far technology has progressed in recent years and what advancements are still conceivable. Unfortunately, few people will use the mod because most people have gone on to the sequel and other Star Wars games. However, AD Massicuro is working hard on another fantastic tech display for PC owners who like to push their machines to their maximum.