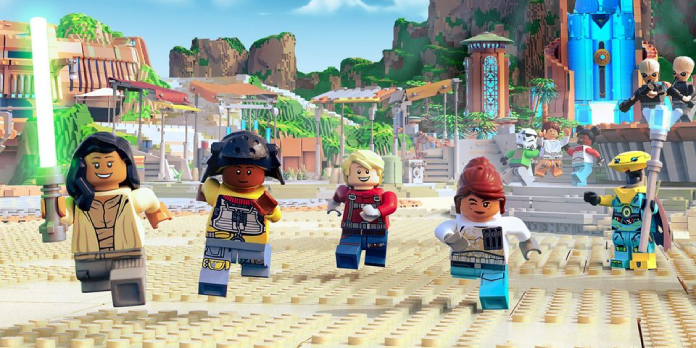 Lego Star Wars: Castaways, an Apple Arcade exclusive release, claims to let players explore a hidden multiplayer universe within the classic “galaxy far, far away” within the iconic “galaxy far, far away.” Video games like developer Traveller’s Tales’ long-running line of LEGO-based products continue to sell to all ages and give a pleasant experience centred around some of fiction’s most popular properties, much as the Danish building toy remains a regular fixture for kids all over the world.

With the debut of LEGO Star Wars: The Video Game in 2005, a new wave of LEGO gaming experiences began, and the legendary sci-fi brand is still going strong with additional LEGO titles launched in recent years. Lego Star Wars Battles debuted on Apple Arcade last month, providing fans of all ages with multiplayer tower defence games featuring the Light and Dark Sides of the Force battling it out in adorable plastic combat. Additionally, after a lengthy delay, LEGO Star Wars: The Skywalker Saga is planned to release next year, promising to depict the events of all nine main Star Wars films in LEGO form. Before that, a new LEGO Star Wars game will introduce the property to online multiplayer.

Also See:  Wendy’s restaurant has its own phone now, with Wendy inside

According to GamesRadar+, Gameloft, the Asphalt and Disney Magic Kingdoms developer, recently announced Lego Star Wars: Castaways. This new title will be released as an Apple Arcade exclusive on mobile devices and promises to be the “first social, action-adventure” in the LEGO Star Wars franchise. Players will be able to create their own personalised LEGO character and explore a “hidden universe” either alone or through online multiplayer, according to Gameloft’s Twitter account and the LEGO Star Wars: Castaways Mac App Store preview page. Fans may accomplish special tasks, race mini-model reproductions of legendary Star Wars vehicles, and reenact classic Star Wars scenes in simulations that are supposed to be “recorded by the technology of an ancient civilisation” in this new LEGO sandbox.

LEGO Star Wars: Castaways will be coming to @AppleArcade on November 19! Create your character and join friends on new adventures https://t.co/VZOS6JX7xh pic.twitter.com/enEKik6KJy

Apart from this LEGO sub-franchise, Star Wars has made a comeback in the gaming market during the last few years. After a shaky start with EA and DICE’s Star Wars Battlefront remake and its 2017 sequel, Star Wars Jedi: Fallen Order delighted fans with an engaging single-player experience, and Star Wars Squadrons replicated the atmosphere of the old X-Wing simulation games last year. With Aspyr unveiling, a long-awaited remake of Star Wars: Knights Of The Old Republic and Ubisoft working on a “story-driven,” open-world Star Wars game, more Star Wars excitement is on the way.

LEGO games have long been a reliable source of bite-sized, family-friendly entertainment, and LEGO Star Wars: Castaways looks to keep that trend going by letting players create their own LEGO characters and explore a multiplayer environment packed with iconic Star Wars vehicles and creatures. When LEGO Star Wars: Castaways comes on Apple Arcade on November 19, fans will be able to set their hyperdrives to this world.

Xbox Game Pass Might Be Heading to the Atari VCS