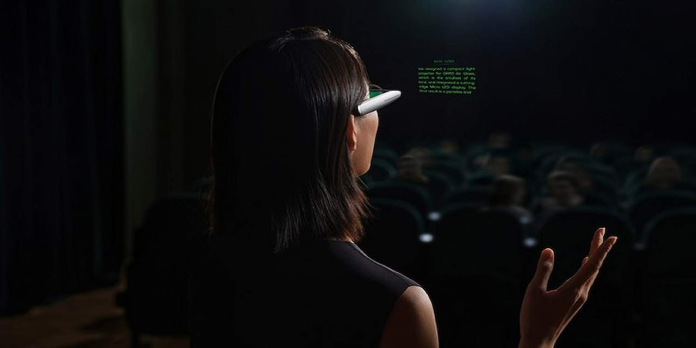 OPPO unveiled Air Glass, a new “assisted reality” wearable that isn’t like the AR (augmented reality) glasses of the past, today at INNO Day 2021. When we think of augmented reality headsets, we usually think of Google Glass or the Magic Leap One, but the OPPO Air Glass looks quite different from both of those items. For starters, the OPPO Air Glass has a detachable monocle style, but it also appears to narrow the focus of AR glasses with a simple heads-up display and a tiny but usable app library.

According to OPPO, Air Glass is a “minimalist” device that employs a diffraction optical waveguide display and OPPO’s own Spark Micro Projector, which uses Micro LED. The Air Glass has a single display (similar to Google Glass) that can be magnetically attached to a frame, and OPPO has announced full and half-frames for it today. The total device weighs 30 grams and is powered by a Qualcomm Snapdragon Wear 4100 processor.

Also See:  You can Install this Update When your iPhone is Finished Restoring

The projector at the heart of Air Glass, according to OPPO, is roughly the size of a coffee bean, but it can offer up to 1,400 nits of average brightness when partnered with the waveguide display. The display is sandwiched between two pieces of sapphire glass and can output in 16-level or 256-level grayscale, so users shouldn’t expect any fancy visuals.

That’s fine, though, because the Air Glass only requires the greyscale display to do its function. The Air Glass, according to OPPO, may be used with an OPPO Watch 2 or any OPPO smartphone running ColorOS 11 or higher. Air Glass can be controlled by hand gestures when used with the OPPO Watch 2, which is a unique feature. Head movements are also recognized by Air Glass, with nods bringing up notifications and shakes dismissing them.

The Air Glass, like any other AR glasses, allows touch and voice capabilities in addition to head and hand movement controls. The apps available on Air Glass will be limited at first, but they will be helpful nonetheless. The usual suspects are available, like weather, health, and calendar apps, but OPPO also includes a teleprompter software with the Air Glass, which may make it a proper presentation tool.

Also See:  How to Turn an Old Android Tablet Into an Auto-Updating Digital Photo Frame

Finally, Baidu developed an Air Glass walking and bicycling navigation software to provide users with directions on display. Air Glass will tell users when there are stores or sites of interest nearby if they utilize Baidu’s Explore Nearby app.

OPPO may be onto something by simplifying the AR wearable experience and making it more of an assisting device. While Air Glass won’t support a wide range of apps at launch, the few that it will support have a lot of potential in the AR area, so it’s a gadget to keep an eye on as we approach 2022. It will debut in mainland China in Q1 2022, with no other launch locations revealed yet.

The Xbox One Error Code E203

How to: fix screen flickering after upgrading to Fall Creators Update