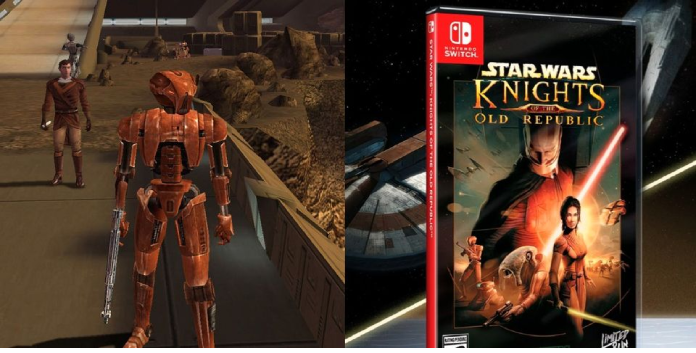 Lucasfilm and Limited Run Games have teamed up to create a series of Star Wars: Knights Of The Old Republic special edition physical releases for PC and Nintendo Switch, complete with various interesting collector goodies. BioWare’s depiction of the mythical Galaxy Far Far Away was critically acclaimed when first published in 2003. It moved fans beyond the Star Wars movies and added now-iconic characters like Bastila Shan and Darth Revan. Even after nearly two decades, KOTOR is still recognised as one of the best Star Wars games ever developed. It paved the path for BioWare’s later success with original RPG titles like Mass Effect and Dragon Age.

A veteran Star Wars port developer, Aspyr published Star Wars: Knights Of The Old Republic for the Nintendo Switch earlier this month, much as it did for Android and iOS devices a few years ago. While fans have had issues with the Nintendo Switch port of Star Wars: Knights Of The Old Republic, such as a lack of technical options compared to the PC version available on Steam, as well as larger-than-normal text boxes during KOTOR combat, Asypr’s latest KOTOR port has so far managed to avoid the issues that plagued the Switch version of Star Wars: Republic Command that launched in April.

Limited Run Games, a collectable gaming firm, has announced a line of special-edition Star Wars: Knights Of The Old Republic for the Nintendo Switch and PC. These rare collectable editions will be available in three varieties, according to Limited Run Games’ official Twitter account: a Standard physical copy of KOTOR for the Switch, as well as Premium and Master Editions for both platforms. A reproduction Pazaak card deck, a metal Ebon Hawk pin, and two miniature Darth Revan lightsaber hilts are the additional collectable items included in these two special editions.

Choose Your Path.
Limited Run Games is giving Star Wars: Knights of the Old Republic a physical Switch release! Alongside our Switch Standard Edition, Premium & Master Editions will be available for both PC and Switch. 6-week open pre-orders start 11/19 at https://t.co/uFFLbeCnQB pic.twitter.com/MYF24sxoBL

Fans of Star Wars: Knights Of The Old Republic will have a lot to look forward to in the future years, according to Asypr’s announcement of a full current-gen recreation of the game during September’s spectacular PlayStation Showcase Livestream. Although it will originally premiere as a timed PS5 exclusive, nothing is known about the future project, and original KOTOR producer BioWare will not be engaged in its development.

Limited Edition Games’ upcoming special collector’s editions of the original Star Wars: Knights Of The Old Republic contain plenty of interesting bonus items for hardcore fans, ranging from concept art cards to fun little novelties like a Vibroblade letter opener and a Security Spike USB drive, while fans wait for more news on the remake. Pre-orders for all three of Limited Run Games’ Star Wars: Knights Of The Old Republic special edition sets are now open, with KOTOR fans able to get their hands on the games starting November 19.

The Creator of Marvel’s Spider-Man Responds to the Backlash Over the...

After Release, Resident Evil 4 VR Mercenaries Mode Will Be Included...