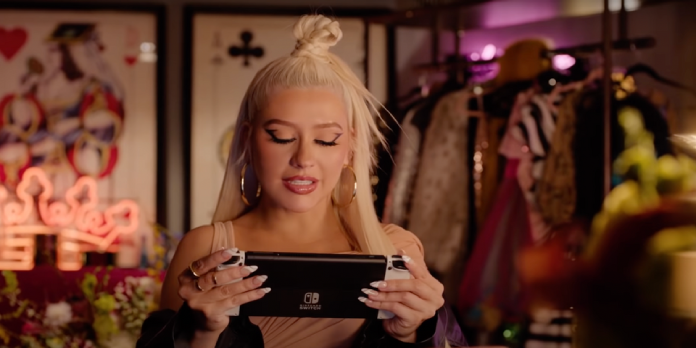 Christina Aguilera is presently on tour, but a new Nintendo Switch commercial shows her having fun with her kids on the portable gaming platform.

Christina Aguilera and her family star in a new Nintendo Switch commercial that showcases the singer’s amazing gaming abilities. Advertisements are a potent weapon in the continuing console battle between Xbox, PlayStation, and Nintendo in the gaming business, with well-known celebrities frequently being pulled into the fray. While Nintendo linked up with Christina Aguilera, Xbox recently teamed up with Dwayne “The Rock” Johnson in a hilarious 20th-anniversary celebration.

Most people trust prominent figures more than strangers. Therefore celebrities are employed to make video game ads more enticing. Because The Rock has a personal relationship with Microsoft’s consoles, this has led to frequent collaboration between The Rock and Xbox. The Jumanji and Fast & Furious star have previously collaborated with Xbox on several commercials. Last year, he also organized a charity event that sent Xbox Series X/S systems to several children’s hospitals. PlayStation, on the other hand, has managed to assemble its celebrity fan base. For example, Rick and Morty appeared in a PlayStation 5 commercial in November 2020, just after the launch of new-generation consoles, outlining why viewers should buy Sony’s new system.

Christina Aguilera appears in a new Nintendo Switch commercial, which shows her using the portable game device to communicate with her family while on tour. The commercial opens in the dressing room of the American singer, songwriter, and actress. Despite being close to a performance, Aguilera can play Super Mario 3D World with her son using the Nintendo Switch’s online functionality. The singer is seen playing Animal Crossing: New Horizons in the car on the way home, while her family is seen playing Big Brain Academy: Brain vs. Brain during game night.

While Christina Aguilera’s Nintendo Switch commercial is a cute look at how gaming can bring families together, Nintendo’s commercials have previously been criticized. Many people argue that previous Nintendo Switch commercials were awful because they misrepresented how gamers interact with the portable platform. For example, many advertisements depict gamers playing the Switch in odd locations, such as a diner or their home corridor. While these places are most likely intended to demonstrate the console’s portability, the adverts come out as forced. Christina Aguilera’s recent ad, in which she uses the handheld system in her dressing room and the backseat of a car, appears to be far more natural.

Celebrities are frequently used as spokesmen in video game ads, and Christina Aguilera remains a huge figure in American popular culture. While gaming commercials are frequently goofy or unrealistic, Aguilera’s ad is a heartwarming picture of life on the road. Unfortunately, on the road, playing games with her kids is impossible. Still, due to the Nintendo Switch’s highlighted portable nature, Christina Aguilera’s gaming night can continue even while traveling around the world.

How to Play Chess Titans in Windows 10