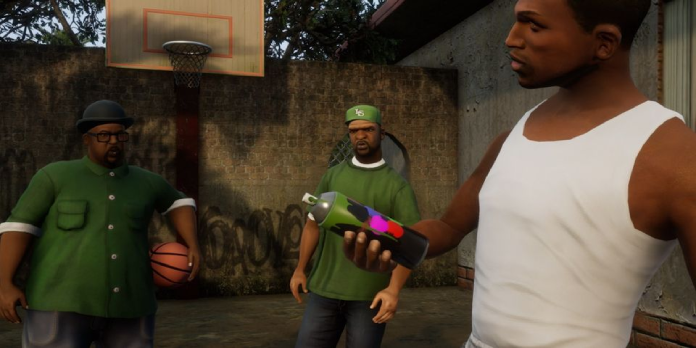 According to multiple user reports, Grand Theft Auto: The Trilogy – Definitive Edition may be pre-loaded on all Xbox platforms before its release.

While details on the remaster have been scarce since their introduction, a recent first full trailer showcased the game’s upgraded current-generation graphics and other significant improvements. The three games are being re-released on modern platforms, with higher-resolution textures, larger draw distances, a rebuilt lighting system, improved weather effects, and – most crucially – updated current controls and gameplay based on the series’ most recent installment. Furthermore, each platform version of the GTA remaster trilogy will differ slightly from the others. For example, the PlayStation 5 and Xbox Series X/S versions can run at 4K 60fps, while Nvidia DLSS compatibility for PC will improve frame rates and picture clarity even more. Meanwhile, the Nintendo Switch port, like the Xbox One and PlayStation 4 versions, will be restricted to 30 frames per second, although the Switch touchscreen can be used to traverse menus, and gyro aiming will be enabled.

Grand Theft Auto: The Trilogy – Definitive Edition is now available to pre-load on all Xbox platforms, including Grand Theft Auto: San Andreas on Xbox Game Pass, according to various user reports on the GTAForums discovered by GTANet on Twitter. While it’s unclear why Xbox is getting a week ahead of the PC and PlayStation versions, several forums have expressed displeasure with Rockstar’s choice, claiming that they feel overlooked despite having paid good money for the collection. In addition, the pre-load sizes have so far been revealed to be smaller than the initial Microsoft Store listing, with all three classics taking up around 38 GB, identical to the PlayStation 5 edition, which is expected to be available for pre-load on November 9.

Also See:  Cricket Wireless expands 5G access to all of its prepaid plans

Another @GTAForums user reports their #GTATrilogy Vice City preload on Xbox is also up!

While the Definitive Edition collection for the GTA trilogy isn’t as massive as other recent game downloads, it’s still substantial compared to similar remasters, which is likely due to the updated graphics and transition to the Unreal Engine. Additionally, the GTA trilogy remasters have so far been shown to have varying download sizes for each platform, with the Xbox consoles’ original file size listing coming in at 49 GB, the Nintendo Switch version at roughly 20 GB, and the GTA remaster trilogy’s PC edition at up to 45 GB.

The Definitive Edition of Grand Theft Auto: The Trilogy is slated to arrive next week, and it appears like Rockstar has given Xbox fans early access to prepare for the launch. While it hasn’t been verified or made public, lucky users will be able to download the GTA trilogy remaster ahead of time, as the long-awaited remaster collection is just around the corner.

On November 11, 2021, Grand Theft Auto: The Trilogy – Definitive Edition will be released for PS5, Xbox Series X/S, PS4, Xbox One, Nintendo Switch, and PC, with iOS and Android versions following in Q1 2022.

Spider-Man and Klaw Raid Gameplay Is Featured in Deep Dive