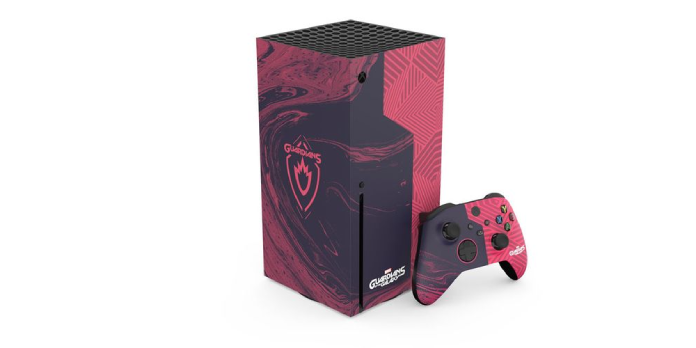 In anticipation of the premiere of Marvel’s Guardians Of The Galaxy later this week, Microsoft is giving away a limited-edition Xbox Series X system.

To commemorate the release of Marvel’s Guardians Of The Galaxy, Microsoft is giving away a limited-edition Xbox Series X console and controller. During June’s E3 2021 Livestream event, Square Enix and Eidos Montreal surprised Marvel gaming fans with a new title based on the Guardians Of The Galaxy, which will put players in the shoes of Peter “Star-Lord” Quill and his lovable band of space heroes as they are tasked with saving the universe from a variety of interplanetary threats.

In the months since, Marvel’s Guardians Of The Galaxy developer Eidos Montreal has continued to show off the game’s dialogue and narrative choices, as well as its updated take on classic Marvel characters like Cosmo The Spacedog, Grand Uniter Raker of the Universal Church of Truth, and even the recently revealed Adam Warlock. Players will be able to obtain various skins for each Guardian based on the original Marvel comics, and Square Enix had promised that Marvel’s Guardians Of The Galaxy would be free of the microtransactions that caused such controversy when Marvel’s Avengers was released last year.

Today, Xbox unveiled a new contest for players to win a limited-edition Xbox Series X Console and Controller inspired by Marvel’s Guardians Of The Galaxy, which features a striking purple grid design and the Guardians’ symbol on the front. Fans can retweet the promotional post below with the hashtag “#GOTGGameSweepstakes” for a chance to win this special Xbox Series X system and controller set, as well as a copy of Marvel’s Guardians of the Galaxy: Cosmic Deluxe Edition, as specified on Xbox’s official Twitter page. This promotion will run from today through November 7, and the winners will be contacted directly by Xbox on November 14.

Follow and RT with #GOTGGameSweepstakes for a chance to win this custom Xbox Series X, Xbox Wireless Controller, and Marvel's Guardians of the Galaxy: Cosmic Deluxe Edition.

This isn’t the first time Microsoft has given out Marvel-themed Xbox Series X hardware, as a specially designed system was given away to honour the release of Shang Chi And The Legend Of The Ten Rings earlier this month. Surprisingly, Microsoft gave this console to Shang Chi star Simu Liu just days after making his big-screen debut as the martial arts-wielding superhero. He even shared some amusing images of himself playing with the Shang Chi toy that came with it on social media.

Also See:  Call of Duty: Warzone Season Six Confirmed To Be the End Of Verdansk Map

Marvel’s Guardians of the Galaxy will be released on October 26 on PC, PS4, PS5, Xbox One, and Xbox Series X|S.