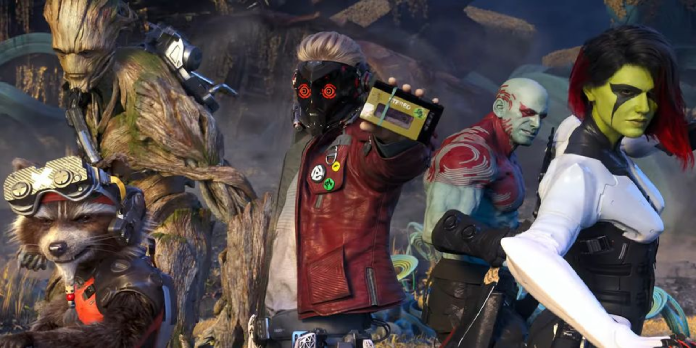 A week before the game’s release, a new TV promo for Marvel’s Guardians Of The Galaxy showcases the game’s high-voltage, 80’s rock-infused tone.

A new TV promo for Marvel’s Guardians Of The Galaxy has been published, showcasing the game’s crazy, 80’s rock-infused tone only a week before its October 26 release date. Players will take on the role of Peter “Star-Lord” Quill as he rallies his ragtag band of mercenaries on a new adventure to save the Marvel universe from an intergalactic cult known as the Universal Church of Truth, among other threats, in Square Enix and Eidos Montreal’s new space-faring superhero action title.

While players will only be able to direct Star-Lord in Marvel’s Guardians Of The Galaxy, they will be able to issue battle commands to Gamora, Rocket Raccoon, Groot, and Drax The Destroyer, as well as shape the game’s narrative with important dialogue options that will determine how the Guardians react to various situations throughout their journey across the cosmos. Cosmo the Spacedog, Lady Hellbender, the enormous AI Worldmind, and even the recently revealed Adam Warlock, who Eidos Montreal has confirmed as a prominent character in the game, will all be aboard for the voyage. In addition, Guardians of the Galaxy players will be able to unlock costumes straight from the comics as well as classic 80s music tracks, and the game’s promotional material promises a fun, squad-based romp with the team that mainstream audiences have come to know and love from the highly successful MCU films.

The new Marvel’s Guardians Of The Galaxy “You Got This” TV advertisement, posted on Eidos Montreal’s YouTube page yesterday, demonstrates this. The Guardians are in a tough predicament facing a squid-like space monstrosity and an army of what appears to be Lady Hellbender’s troops in this brief prerendered film. With their ship destroyed and “Plan A” has failed, Star-Lord implements “Plan B,” which entails flipping his mixtape to Side B and directing the crew to happily blast through the enemy forces while listening to Motley Crew’s “Kickstart My Heart.”

While Marvel’s Guardians Of The Galaxy surprised fans when it was first announced at E3 2021 in June, Square Enix has maintained a steady wave of anticipation for its new superhero game while assuring fans that it will not suffer from the same microtransaction issues that plagued Marvel’s The Avengers last year. Eidos Montreal has also promised that its version of the Guardians Of The Galaxy will include plenty of interesting twists on the classic Marvel lore, such as Gamora’s relationship with Nova Corps member Richard Rider and Peter Quill’s “Star-Lord” moniker being inspired by an 80’s metal band – which will even have its animated music video in Guardians Of The Galaxy.