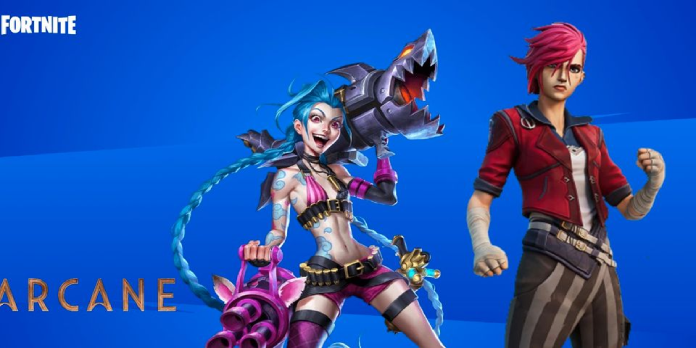 A dataminer has uncovered a new League of Legends and Fortnite crossover, bringing Arcane’s Vi and Jinx to the battle royale.

A recent leak by a dataminer has revealed new character packages for Arcane’s formidable Vi and the return of the pink-haired brawler Jinx, hinting at another League of Legends crossover for Fortnite. Jinx first appeared in Fortnite in 2021 to promote Riot Games’ upcoming League of Legends animated show, Arcane. In addition to the crossover character pack, Epic Games announced a new relationship with Riot Games, which would bring all of the studio’s games to the Epic Game Store, including every League of Legends game and the tactical first-person shooter Valorant.

Fortnite’s crossovers have defined the game, with famous collaborations including Star Wars, DC’s Batman, Resident Evil, and a slew of Marvel characters and events. With the release of Chapter 3 in Fortnite, Epic Games released one of the game’s greatest crossovers to date, introducing everyone’s favourite web-head Spider-Man to the game and his web-shooters, which allow players to navigate the area while swinging effortlessly. Many more characters from other major media properties have made cameo cameos in Epic’s free-to-play battle royale, allowing the game to remain profitable thanks to ancillary virtual goods, exclusive emotes, and new skins that are highly appreciated by gamers.

Dataminer iFireMonkey disclosed new shop bundle leaks on Twitter through (Game Rant), confirming a second Arcane skin is coming to Fortnite, including Vi and the return of Jinx. Vi’s bundle contains a Red Jacket skin, Jayce’s Hammer harvesting tool, Toy Rabbit back bling, an unknown emote, and brand new Arcane artwork for Fortnite’s loading screen, all of which are inspired by Arcane. Jinx is also back, with an Arcane Jinx outfit, a Pow Pow Crusher harvesting tool, Dream Monkey back bling, and other goodies, including a music track and two new Arcane and Fortnite splash art pieces included in her bundle. Skins and cosmetics based on Arcane are now in the game’s files and will be released within the next two weeks.

Here is what Vi (Fortnite x Arcane) looks like in game!

The second League of Legends crossover appears to be one of three coming to Fortnite in the coming weeks. According to recent sources, Marvel’s Hawkeye will be coming to Fortnite, with an exclusive package featuring Clint and Kate skins and cosmetics. In addition, Spider-Man’s arch-nemesis The Green Goblin is set to make an appearance with another exclusive package, which could lead to the first crossover event in Chapter 3.

The presence of Arcane’s Vi and Jinx in the game’s files, like earlier recent leaks, could indicate that the crossover is on the way. Although Epic Games has yet to confirm the rumour, Fortnite’s new Chapter 3 appears to be the biggest yet, with a slew of additional crossovers and promotional tie-in material promised in the following seasons.

Fortnite is playable on the PlayStation 5, PlayStation 4, Xbox One, PC, Nintendo Switch, and Android phones and tablets.