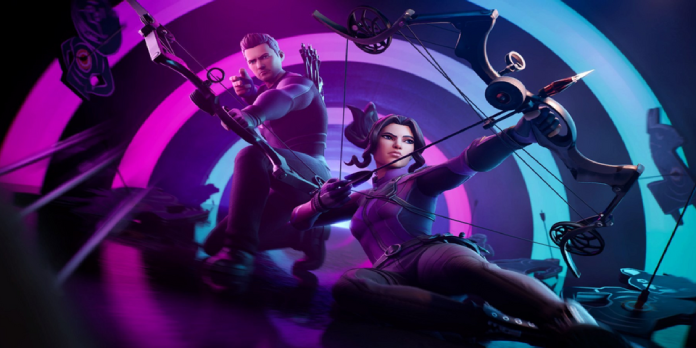 A noteworthy leaker has disclosed that skins and cosmetics for Hawkeye‘s Clint and Kate are now concealed in the game’s files and could be revealed in the coming weeks, indicating that Fortnite’s next major Marvel collaboration could be on the way. Fortnite’s crossovers have defined the game, with famous collaborations including John Wick, Ghostbusters, DC’s Batman and Joker, and a slew of Marvel characters. With the release of Chapter 3 in Fortnite, Epic Games revealed one of the game’s greatest crossovers to date, introducing fan-favourite Marvel superhero Spider-Man and his web-shooters to the game. Many more characters from other major media properties have made cameo cameos in Epic’s battle royale, bringing virtual accoutrements, exclusive emotes, and new skins to help make the game profitable.

Fortnite Chapter 3 was recently released with new features, mechanics, and a brand-new map with unique POIs that can be utilized to quickly unlock many of the game’s new features and earn XP. The chapter’s first season, like previous seasons, contains a slew of new characters, cosmetics, and gameplay mechanics like sliding, swinging, and a tent system that can now be used to replenish health, rest, and store things earned at the start of each game. The most notable inclusion is the return of Tilted Towers, a popular Fortnite feature. After two and a half years, fans may finally tour the city at their leisure and relive the popular POI.

HYPEX, a Fortnite-focused video maker and well-known news account, has teased the future of Fortnite again with a new leak about Chapter 3. According to a tweet, according to HYPEX, Fortnite’s next significant Marvel cooperation will be none other than Marvel’s Hawkeye within the next few weeks. The leaker says that skins and cosmetics for Hawkeye’s Clint and Kate may be found directly hidden in the game’s files. Although Epic Games has yet to confirm the leak, the leaker is a long-time credible source who shares each cosmetic to give players a better idea of what to expect when the announcement is made.

Fortnite x Hawkeye collab skins (Clint & Kate) are currently in the files, the collab will happen in the next 2 weeks! pic.twitter.com/II7lwx1Osr

Hawkeye isn’t the only Marvel superhero rumoured to be making an appearance in Fortnite in the coming weeks. Another recent rumour claims that the comic-accurate Green Goblin, as well as the villain’s myriad cosmetics, would be heading to Fortnite. The Green Goblin and his arsenal may be arriving at the title as part of a special event, given his arch-nemesis, Spider-Man, was introduced at the start of Chapter 3.

Hawkeye skins and cosmetics in the game’s files could indicate that a crossover is on the way. Epic Games has yet to clarify if the partnership rumour is accurate. Still, it’s more than likely to be true, given that Fortnite’s forthcoming seasons are set to feature a slew of new crossovers and promotional tie-in content.

Fortnite is playable on the PlayStation 5, PlayStation 4, Xbox One, PC, Nintendo Switch, and Android phones and tablets.