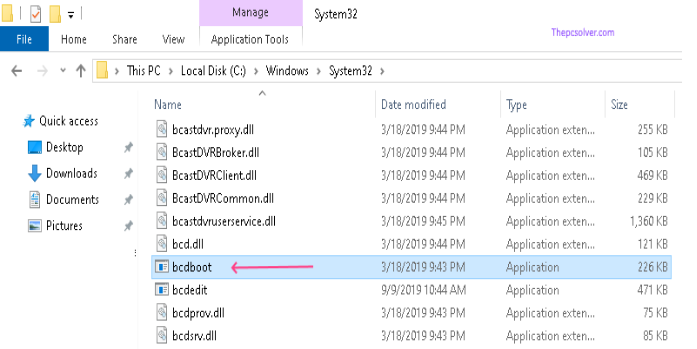 Here we can see “bcdboot.exe”

bcdboot.exe is a Windows command-line application that installs and configures the bootmgr bootloader’s boot configuration data (BCD). bcdboot copies the core boot files from a selected Windows installation on the disk to the system boot partition and creates a boot configuration entry for it.

bcdboot is a program that installs the bootmgr bootloader on the system partition, generates a new BCD store entry, and initializes the contents as needed. The Boot Configuration Database (BCD) is a firmware-independent database that stores boot-time configuration data. It took the place of the previous boot. The ntldr bootloader in Windows XP and Windows Server 2003 was originally used ini. The bootsector and master boot record (MBR), which must be configured independently, are not affected by bcdboot. It can be used to either reinstall the bootloader files, overwrite the default boot entry, or add a single boot menu item instead. bcdboot is particularly useful when installing numerous operating systems on a single computer. It can also be used to resolve boot issues, such as an operating system not appearing in the boot menu or a bootloader installation that is out-of-date or corrupted.

The following are the bcdboot command-line arguments:

Instructs bcdboot to copy the critical boot files from the source Windows installation to the system (boot) partition, create a BCD entry, and add it to the displayed boot menu. C:\Windows is the most common source format. Boot environment files and the BCD store are saved on a reserved UEFI system partition on UEFI-based systems, whereas these files are stored on the primary (active) partition on BIOS-based systems.

This option determines the boot environment’s localization; the locale value is en-us for US English.

Copies the boot environment files to the volume letter partition and creates a new BCD store there. This option isn’t used in most deployment scenarios because the system partition isn’t identified. The user should use this option when configuring a disk that will be utilized on another computer, such as a secondary hard drive, or if the correct boot partition is not automatically found. In the section below about the /f option, you may learn more about the differences in deployment depending on the firmware type.

The firmware type is specified here. UEFI, BIOS, and ALL are all valid options. Used in conjunction with the /s flag. Only UEFI-compliant boot files are copied, and a BCD store is initialized on a partition given by the /s flag, making it compatible with UEFI-based systems. For BIOS-based computers, the BIOS value has the same effect. The ALL option installs both the BIOS and UEFI versions of the bootloader and configures their BCDs.

/v
activates the verbose mode. Extra information about the operations being performed is displayed to the end-user in verbose mode.

To build a bootable entry, it merges an existing BCD entry specified by the GUID OSloaderGuid with the system template. This option merges only global items by default.

Bcdboot’s default behavior is to place the newly created entry first in the Windows Boot Manager menu. Instead, it is added as the last entry in the list using this option.

/p
This option is used to keep the existing UEFI boot order. The boot entry locations are retained, and if the entry does not exist, it is added to the list as the first entry. It is not compatible with the /add last option.

Existing objects (BCD elements) will not be moved if you use /c. BCD elements such as debug settings and flight signing are retained throughout a Windows 10 update.

Also See:  How to Watch Channel 4 in the Us Live & Online

To add a Windows installation from the D: drive to the boot entry and copy the boot environment files to the system partition:

To copy the boot environment files to a secondary hard drive partition called D: including boot files for either a UEFI-based or a BIOS-based computer:

1. What exactly is Bcdboot EXE?

bcdboot.exe is a Windows command-line application that installs and configures the bootmgr bootloader’s boot configuration data (BCD). bcdboot copies the core boot files from a selected Windows installation on the disk to the system boot partition and creates a boot configuration entry for it.

2. What is the procedure for resetting my bootloader?

Follow these steps to execute a hard reset: Turn your device off. Hold down the power and volume down buttons simultaneously until the Android bootloader menu appears. The volume buttons are used to cycle through the many options on the bootloader menu, and the power button is used to enter/select.

3. What is the purpose of BCDEdit Bcdboot?

Boot Configuration Data (BCD) files serve as a repository for describing boot apps and their parameters. BCDEdit is a command-line utility that allows you to manage your BCD files. It can be used to create new stores, alter current stores, and add boot menu options, to name a few examples.

Do I need BCDBoot.exe? from sysadmin