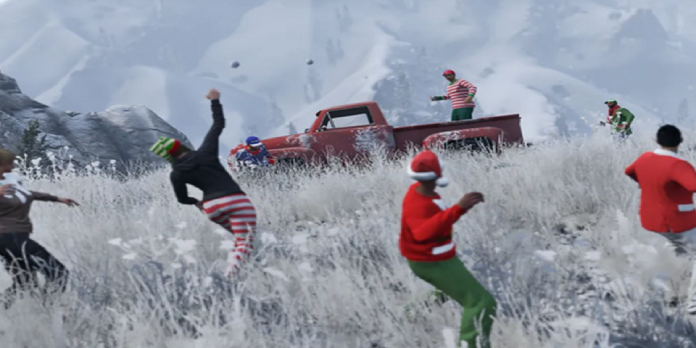 After a player was wrongfully tased – and the offender was hit by a car shortly after – a GTA Online snowball fight ended in horror.

In an amusing turn of events, a Grand Theft Auto Online player engaged in a snowball fight was tased before witnessing their adversary hit by a car in a perfectly timed disaster. Snowfall is a yearly ritual in GTA Online, and players that visit Los Santos will be able to see the white blanket that has blanketed and influenced the game’s map for a brief time. Additionally, players can expect free festive things, such as outfits and automobiles, and exclusive promotions to help them embrace the Christmas season and harmless snowball battles.

Grand Theft Auto V is almost a decade old, but it is undoubtedly Rockstar‘s most popular and successful game. The title’s online sandbox mode continues to receive large upgrades and expansions to add new content, features and develop the title’s lore, even though its base game and story haven’t had any substantial improvements or overhauls since its last-generation re-release. Thanks to its large player base and sustained commercial success, Grand Theft Auto V will be re-released on PlayStation 5 and Xbox Series X/S early next year. In addition, next-gen gamers will be able to enjoy the game’s Enhanced Edition, which has enhanced visuals and gameplay, faster loading times, and a slew of new features that have yet to be revealed.

On Reddit, member OwenTheToad posted a video of himself engaged in a snowball war, which was hilariously terrible. On Vespucci Beach, the user has a snowball fight with another player during the short film. While it appears to be a playful snowball fight, the other player takes a taser out of nowhere and tases the user, who then collapses to the ground. However, in an unexpected turn of events, a random vehicle races onto the beach. It collides with the perpetrator, killing them instantly and securing the user’s victory (who claims to have laughed at the situation for an hour).

Over the years, GTA Online has seen a slew of updates that have added new activities and jobs and a slew of new quality of life updates – similar to the winter update – that have revitalized the game’s user base. In addition, GTA Online recently released “The Contract,” a major new content update that allows players to see Franklin Clinton, Chop the Dog, and Lamar return from Grand Theft Auto V, as well as new exclusive music from Dr. Dre, a new radio station, weapons, and new ways to acquire cash to take advantage of the winter update.

Snowball battles are only a minor component of GTA Online’s upcoming winter update since there are plenty of other rewards for those that participate. Holiday gifts include the Clownfish Mask, a Firework Launcher, the Gallivanter Baller ST vehicle, and other random goodies for those who join GTA Online before Christmas Day. The winter update and Los Santo’s snow are only available for a limited time, so anyone interested in receiving goodies and experiencing everything the holiday update offers should do so before December 29.