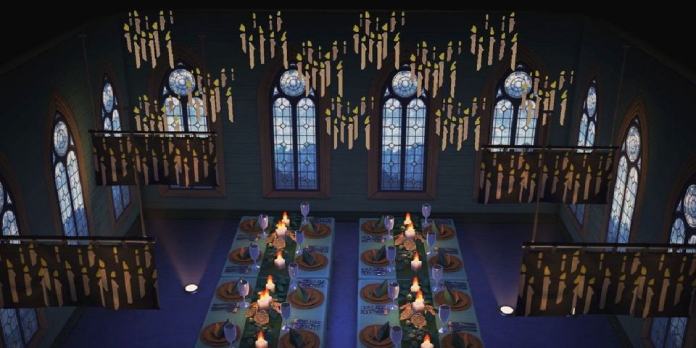 An Animal Crossing: New Horizons player has created a detailed reproduction of Harry Potter’s Hogwarts castle’s Great Hall. Since the game’s debut in the spring of 2020, enthusiasts have enjoyed creating themed islands in New Horizons, with some recreations taking up little bits of land and others spanning entire islands. Builds can become complicated and sophisticated due to the enormous variety of ornamental items available and the possibility to construct bespoke designs.

There are even more alternatives for massive island constructions now that the New Horizons 2.0 upgrade and associated Happy Home Paradise DLC have been released. By purchasing the DLC, players can obtain new talents like accent walls, mood lighting, and partition building. Thousands of new objects released in both the update and the DLC add to each element. In addition, the new Horizons features an unusually large selection of goods that are ideal for the magical locales portrayed in Harry Potter, making it a popular choice for an island theme.

On Reddit, a New Horizons player known as DesignsByCaleb published an incredible Harry Potter-themed build showing Hogwarts castle’s Great Hall. Long tables with place settings, elegant full-length glass windows, and the iconic floating candles from the Harry Potter movie are all included in the reconstruction. The design even includes banners placed above the tables, albeit the colors of the banners are difficult to discern due to the hall’s dim lighting. Hundreds of magical pupils and a cast of exhausted professors are the only things lacking from the overall look, awaiting Dumbledore’s start-of-feast address.

The Great Hall, for example, is an ideal location for a large-scale photoshoot with friends. Players can welcome friends to their houses to see the painstakingly created structures and be a part of the excitement by opening a New Horizons island to visitors. Many people may also have a set of robes and a pointed hat thanks to Able Sisters’ Halloween costumes, appropriate for a journey to a Harry Potter-inspired island. In addition, the Great Hall might be arranged for photographs inspired by movie moments, such as a holiday feast or the start-of-the-year Sorting, if there are enough visitors.

Also See:  How to Defrag Your Drives in Windows 11

The renowned locale of Harry Potter isn’t the only one that has inspired a New Horizons island design. Players have replicated areas from The Legend of Zelda: Breath of the Wild and the Pokémon game series. There have even been full-fledged island designs based on Ikea’s furniture. Dedicated Animal Crossing: New Horizons enthusiasts will spend hundreds of hours gathering resources, constructing, and building each project. Despite this, one of the main reasons the game has stayed popular over the years is the builds.