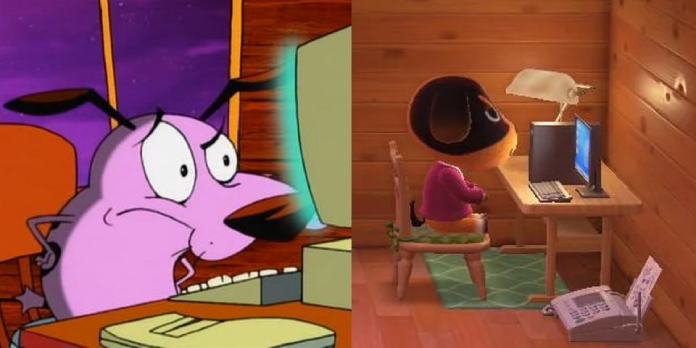 The interior and outside of Courage the Cowardly Dog’s house in the Middle of Nowhere has been meticulously rebuilt by an Animal Crossing player.

The classic house in the Middle of Nowhere from Cartoon Network’s Courage the Cowardly Dog has been replicated by a player of Animal Crossing: New Horizons. The house is one of the most famous in animation history, thanks to its remote location and eerie appearance, making it an ideal contender for a video game recreation of Courage, the Cowardly Dog.

Animal Crossing: New Horizons has become a must-play game for creative users who adore decorating and designing. The Nintendo game contains several different construction tools to help players bring their ideas to life, such as cliff permissions and waterscape, letting users construct everything from restaurants to parks. Many Animal Crossing: New Horizons players have used the game to recreate sequences from other video games, as well as legendary moments from movies and television shows. There have been whole video recreations, such as the Home Alone trailer redone in Animal Crossing and locations from The Legend of Zelda series and sequences from Spirited Away.

Thanks to the Happy Home Paradise DLC, Animal Crossing fan and Redditor CheesecakeOriginal64 has perfectly recreated Courage the Cowardly Dog’s home within the game. CheesecakeOriginal64 has recreated portions of the house’s interior rooms, including the living room and Courage’s attic computer area, in addition to the exterior of Eustace and Muriel’s home. Fans of both Courage and Animal Crossing have shown their support for the post, which has received over 15,000 upvotes at the time of writing.

Those seeking to construct their own Animal Crossing house design in the style of Courage, the Cowardly Dog, will need to purchase the Happy Home Paradise paid DLC, which allows users to adjust room sizes and access a variety of design components without having to craft them. It’s also important to choose the correct villager for the vacation home, and the Redditor wisely chose the dog villager Butch for their build.

The magnificent Animal Crossing home isn’t the game’s first-time Courage the Cowardly Dog has met in a fan build. Shortly after the game’s release last year, one imaginative user demonstrated the AC community’s devotion for the fearful dog by recreating the Courage the Cowardly Dog prologue using Animal Crossing. Based on the response to both the video and CheesecakeOriginal64’s new build, it appears that many players enjoy the Cartoon Network classic, implying that other recreations are likely in the future.