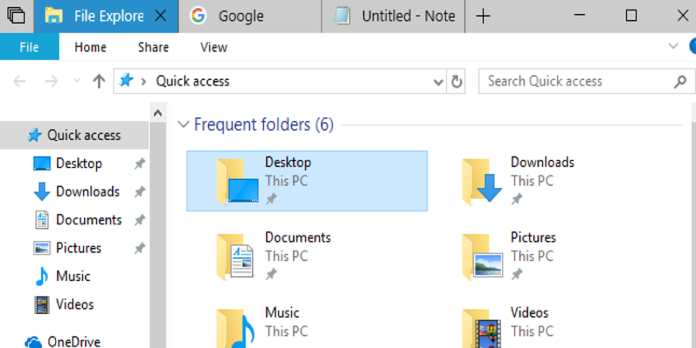 Here we can see, “Using Sets in Windows 10 to Create Tabs for Different Apps”

Introducing Sets, one of the most significant updates to the Windows desktop experience in many years. Almost every application now has tabs in its title bar, which is a recent development. In addition, multiple tabs from different applications (such as File Explorer, Microsoft Word, and Edge) can be displayed in the same window.

This functionality is now available in the Redstone 5 Insider Preview builds, which are currently under development. Redstone 5 will be published sometime in 2018 under a different name than the current one. Additionally, Microsoft has stated that Sets would only be released when complete, which means it may or may not be launched this year.

What Exactly Is Sets?

Sets is a new feature that allows you to have tabs in the title bar of practically every program window. This implies that you may finally use tabs with apps such as File Explorer, Command Prompt, Notepad, and other programs that previously did not support tabs. You may also open a Microsoft Edge browser tab in practically any window by using this feature. For example, consider the following scenario: you’re working on a project in Microsoft Word when you decide to open an Edge browser tab to seek something on the web and then switch back to your document – all from the tab bar, without having to switch windows.

Which applications are compatible with sets?

Sets are not supported by desktop applications that do not use the normal Windows title bar, such as Google Chrome, Mozilla Firefox, Steam, and iTunes. As a result, developers would have to make changes to such programs for Sets to function properly.

How to make use of the new tab bar sets

The Microsoft Graph feature also keeps track of the groups of tabs that you have combined in the past. As a result, reopening an activity from the Timeline that you were previously working on reopens all of the tabs related to that activity.

Shortcuts for Creating Sets on the Keyboard

Some new keyboard shortcuts are available to help you manage the Sets tabs:

These are essentially the same keyboard shortcuts for web browsers and other apps with tabs, except that the Windows key is now included in the list.

Sets: How to Configure Them

The Sets feature is likely to enhance during the project’s development, but it is presently performing admirably. When it was first introduced, it was tested in the Redstone 4 preview releases. However, it was later withdrawn and did not appear in the stable April 2018 Update. As part of Redstone 5, Microsoft is resuming its efforts on it once more.

I sincerely hope you find this advice to be helpful. Please do not hesitate to contact us using the form provided below if you have any questions or comments.

Tiles on the Windows 10 Start screen can be rearranged by dragging them to different locations on the screen. As an alternative, you can arrange similar tiles together in whatever groups make sense to you. For example, drag the Calculator tile from the Start screen to a new spot on your desktop.

2. What is the best way to group programs on Windows 10?

Virtual desktops allow you to group applications for whatever purpose you like. For example, task view can be found on the Taskbar, followed by New desktop, and then the apps you require are opened. To move programs across virtual desktops, choose Task view and drag the app you wish to move from one desktop to another.

With the latest Insider versions of Windows 10 and Microsoft Edge, your tabs will now appear in Alt + Tab, allowing you to transition between programs and websites more rapidly than ever before. In addition, you can now quickly access the tabs for your most often visited websites directly on the Taskbar.

Also See:  What Software Can I Use to Add Tabs to Windows 10?

4. It is feasible to reintroduce the “Sets” feature back into the game. (In Apps, there are tabs.)

Is it possible to bring the "Sets" feature back? (Tabs in Apps) from windows

Gamarue Malware: How It Works and How to Remove It