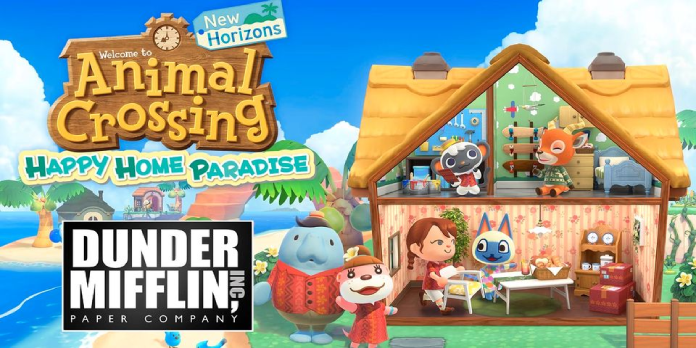 This week, a player of Animal Crossing: New Horizons offered a tribute to The Office: a reproduction of the show’s iconic main set created with the new DLC Happy Home Paradise. Since the game’s release in 2020, gamers have been coming up with inventive and creative ways to decorate their islands, with many of them sharing recreations of iconic pop culture locations online. Players now have even more creative options thanks to the release of the new design-focused DLC.

With the release of the game’s 2.0 update and the paid Happy Home Paradise DLC in November, Animal Crossing acquired a significant quantity of new content. Both brought a host of new objects and gameplay concepts, giving players a plethora of new ways to customize their islands. It’s all about design with the new DLC, and the player can now work as an interior decorator on an unknown island, constructing vacation homes for people. Many new design components were incorporated in Happy Home Paradise, including pillars, partition walls, and lighting modifications. These further gameplay improvements have allowed for even more detail in in-game design, inspiring gamers’ slew of new ideas.

This week, Reddit user atlanta clause published their unique concept of realistic reproduction of the set from The Office. The user is a die-hard fan of the program, as their design is faithful to the set’s layout and contains numerous Easter eggs that reference famous episodes. A plate of green gelatin sits on Dwight’s desk, referencing Jim encasing Dwight’s stapler in Jello in the pilot episode. A family portrait on Jim’s desk alludes to a classic Season 9 cold open, in which Jim hires a friend to imitate him and keeps a family photo of the phony Jim on his desk. A cat portrait sits fittingly atop cat-lover Angela’s desk in the back of the room where the accountants sit. Atlanta clause dressed villager Sydney – the vacation home client – in clothing similar to Pam’s from the show and set her behind the receptionist’s desk to complete this Office homage.

The additional features supplied by the Happy Home Paradise DLC helped the Atlanta clause get their design as near to The Office set as feasible – pillars, new office-related objects, and food items helped the Atlanta clause make their design as accurate as possible. Previously in Animal Crossing, this set replica would have been less elaborate and impossible to navigate; however, a crucial feature of the game’s 2.0 update was the ability to move sideways through smaller spaces, allowing for more realistic furniture placement. With all of these thoughtful touches, the user can easily image Sydney as the newest Dunder Mifflin employee.

This beautifully crafted Office tribute is a brilliant example of the Animal Crossing community’s inventiveness. The advent of Happy Home Paradise, combined with the 2.0 upgrade, has given fans of the game a plethora of additional design options. It’s sparked a slew of new ideas from Animal Crossing fans, and the entire new town bundled with Happy Home Paradise has provided plenty of room for them to express themselves.