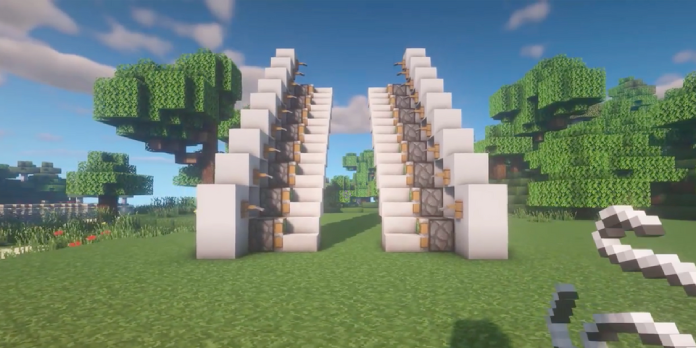 A creative Minecraft player used Redstone to create a set of motorized stairs, and a helpful tutorial video can help other players do the same.

A clever Minecraft player has developed a set of automatic stairs that automatically assemble for the user using fantastic imagination and a lot of Redstone. The survival sandbox game provides players with a range of resources to use, allowing them to create their most elaborate fantasies. While sophisticated Minecraft garden decorations and designs let players demonstrate their keen attention to detail, Redstone’s incredible material allows for endlessly intricate moving structures.

Minecraft has a wide variety of blocks to pick from, including sand, wood, and stone. These bricks add texture to the game’s randomly generated sandbox world and allow players to add texture to their creations. On the other hand, Redstone and its accompanying blocks bring an entirely new level of complexity to Minecraft users possible projects. Redstone functions as an electric current that can be turned on and off, allowing players to program various blocks to do various tasks. Pistons, lights, doors, and other items may be connected to a Redstone current, enabling creations like interactive Minecraft Redstone mazes and statues that light up when a switch is flipped.

Horsemcraft, a Minecraft architect and Reddit user, has created an innovative set of motorized stairs using Redstone. A helpful video demonstrates how the player constructed the ingenious gadget, allowing others to follow in their footsteps. Redstone is attached to sticky pistons on both sides of a narrow gap, and the dust is then connected to a row of tripwires. The pistons have stairs linked to them so that when a player steps over a tripwire, the pistons will push a set of stairs in front of them. The location of each component ensures that the stairs are pushed into the gap the moment the player approaches it, allowing them to climb to the top platform with ease and style.

Some Minecraft players strive for complexity, while others strive for sheer scale and detail when working on a build. While horsemcraft’s automatic stairs are an intriguing Redstone project, another Minecraft player’s massive red panda sculpture demonstrates an admirable effort to a stunning result. The colossal sculpture depicts a red panda walking across a leafy branch, with fantastic attention to detail in the fur and features of the adorable creature. The project’s developer has utilized editing software like Voxelsniper and WorldEdit to create the charming art, but many blocks were also hand-placed, and the build took a long time to complete.

Horsemcraft can nearly glide through the air on a set of motorized steps thanks to the tremendous power of Redstone. Other gamers will be able to steal their work thanks to the helpful training video, which could lead to even more spectacular masterpieces in the future. Horsemcraft’s automatic steps exhibit inventiveness and a thorough understanding of Redstone programming, fitting ideally in a high-tech house or acting as a remote entry.

How to Fix Overwatch Fps Issues in Windows 10