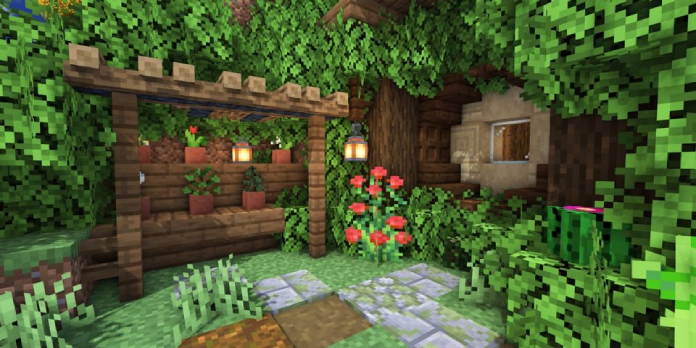 A Minecraft user recently turned to Reddit to share some in-game gardening tips and tactics and some creative hacks with other players.

Over time, Minecraft has evolved into a platform for users to demonstrate their ingenuity and building abilities. Players compete to build large, stunning buildings, such as one player’s recreation of the Ghostbusters’ Ecto-1. Still, they also build smaller scale builds to assist other players and educate them on how to use in-game space fashionably and functionally. A Minecraft user recently used Reddit to do just that, sharing some garden-decorating tips with other players.

Minecraft is well-known for allowing players to construct complex structures. There appear to be unlimited options for players to express their creative skills, from cities to movie sets to various video game consoles. Each new design demonstrates how talented gamers maybe, but not everyone can become the Picasso of Minecraft right away. It can take a few years for players to create and then complete their masterpiece. Building on such a large scale isn’t for everyone. Some gamers like designing smaller constructions and figuring out how to make their in-game homes as comfy as possible.

Meow Craft posted a video demonstrating their garden build hacks and some tips and tactics for newbie builders to use in their games. Their main trick was to employ trapdoors as decorations, giving the impression that the plants were in a wooden planter. They also demonstrated how to make it look like the planters were hanging on the wall using a fence post and chain. Later in the video, meow craft demonstrated how placing a flower pot on a dirt block and then removing the dirt block causes the flower pot to float in mid-air, giving it the appearance of a hanging plant. Some of the creative and unusual ways in which meow craft utilised various items are amazing. The fact that they employed trap doors to create a table for potted plants, for example, is something that not everyone would consider. The possibilities are unlimited, and gamers have demonstrated that even maze creation in Minecraft can be unique.

In his video, Meow craft also demonstrated how to construct a decorative tree out of bamboo, Azalea Leaves, and various flowers. They also demonstrated how to build a night-lit flower garden, a colourful pumpkin field, and a bamboo planter. These suggestions may seem obvious to those playing for a while, but they are excellent guidelines for players to follow while creating their in-game gardens.

It can be challenging to know where to begin when building Minecraft due to its vastness. Building something as stunning as a one-to-one scale recreation of the Seattle Space Needle in Minecraft can take years. These pointers can benefit newer players who are just getting started with the game’s fundamentals. Users that make tutorials provide novice and experienced builders with ideas that can be expanded upon. The Minecraft community is always there to help out and point new players in the correct direction, from little cottages to massive works of art.

Melee Tournaments in Nintendo-Approved Smash Bros. Ultimate Are A First

The Legendary Edition Of Mass Effect Could Be Coming To Xbox...