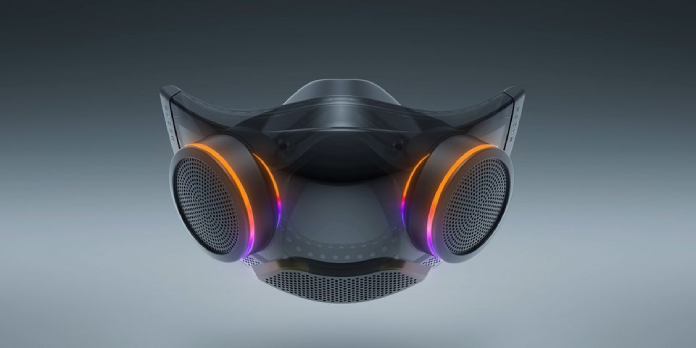 One year after Project Hazel, a concept smart face mask, was introduced, Razer‘s Zephyr is gaining a long-awaited feature. A microphone and speaker were integrated into the initial design to magnify the wearer’s voice. Because of the weight and power problems associated with voice amplification, the function was unavailable when the Zephyr was released – and quickly sold out.

Late in 2021, the original Zephyr face mask became available for purchase, which was in high demand. The mask added flair to wearing a facial covering, which is encouraged in most parts of the United States and mandatory in others. It also met a practical necessity, with N95-grade filters on each of the mask’s intake fans, making breathing easier. The issue with the ordinary model is that the two fan modes ran at 4200 and 6200 rpm, causing audible noises that drowned out surrounding conversations.

In 2022, a new Zephyr Pro version will include voice amplification. According to The Verge, Razer wants to make the Zephyr Pro at a weight of 206.1 grams, which is virtually the same as the normal edition. The business estimates the loss of bulk from the speaker grills at the lower portion of the mask to be almost equal to voice amplification technology. A microphone and speakers built into the mask can project the wearer’s voice at roughly 60 decibels up to a meter away. Razer claims that the new Zephyr will have the same battery life as the standard Zephyr, based on the assumption that users will remember to turn off the amplifier when speaking. The Zephyr Pro’s battery life will certainly be shorter than the ordinary model.

Pricing And Features Of Zephyr Pro

Because of the amplification technology inside the mask, the Zephyr Pro will raise the price of an already pricey face mask. The gadget will cost $149.99 when it arrives on store shelves in 2022. That’s $50 more than the original mask, which cost $99.99 last fall. The real cost of the masks comes in replacing filters, even though they are touted as reusable. According to the manufacturer, the circle-shaped N95-grade filters are only good for three days, and $30 replacement packs are good for around a month. If someone wishes to regularly use the Zephyr smart masks, replenishment packs will cost around $360 per year.

Also See:  How to: Get Windows 11 Right Now For FREE

The idea of a tech-centric face covering, which has been researched and tested by firms and musicians alike, is a fascinating one. Still, it turns out to be more of a fashion accessory than a useful health gadget. In that aspect, the Zephyr Pro is identical to the original model, with black plastics, translucent mouth windows, and RGB lighting that may be customized. Razer‘s Zephyr Pro could be the perfect smart face mask for current Zephyr customers who enjoy the gamer look but can’t get enough fast intake fans.