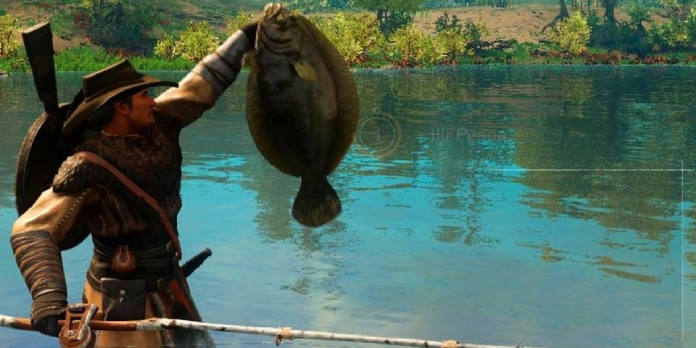 A gamer in the New World is murdering fishing bots with hostile animals and sharing videos every day until the NPCs are banned from the game.

A gamer in New World has pledged to share daily recordings of killing fishing until Amazon Games removes its programmed characters. The quantity of its NPCs varies by realm; some are almost non-existent, while others force genuine people from mining and fishing tasks. Since its release, New World has attracted many players, but there have been some snags along the way.

Patience is required when fishing in the New World, and obtaining rare fish can take a long time. Fishing sites have varying spawn rates, and bots appear to gather in areas where they may catch the rarest – and thus most profitable – catches. They’re easily identifiable by how they cast and retract their rods every few seconds until they catch the rarest fish or treasure boxes in the New World.

Dawiss2, a Reddit member, has decided to take matters into their own hands until Amazon completely prohibits the bots. The user shared a video showing them leading a hostile wolf to one of the bots so that the NPC would be killed and the fishing place would be freed up. Unfortunately, because bots are typically programmed to perform the same activity repeatedly, they cannot fight back or respawn unless the bot’s creator manually examines the account. The user isn’t the first to utilize animals to clear NPCs from New World, but they are one of the first to draw the developer’s notice to the issue.

This technique, despite its excellent intentions, has flaws. One of the most serious is the possibility that players attempting to assault will unintentionally target real people. Some players have mentioned how unexpected animal assaults have disrupted their peaceful fishing trips. This can occasionally be used to get around the game’s PvP system and kill players who have turned off PvP. Bots in New World may be a problem, but the current approach may also be troublesome.

Also See:  The Halo Infinite Campaign Is Significantly Improved Over The Original Reveal

Amazon stepping in and banning bots would be the best solution to the bot problem. However, any automated bans must be handled with caution, mainly since ban abuse has already occurred in New World. Until an official policy is devised to target bots without banning innocent users, destroying them looks to be the only option to fish in peace.