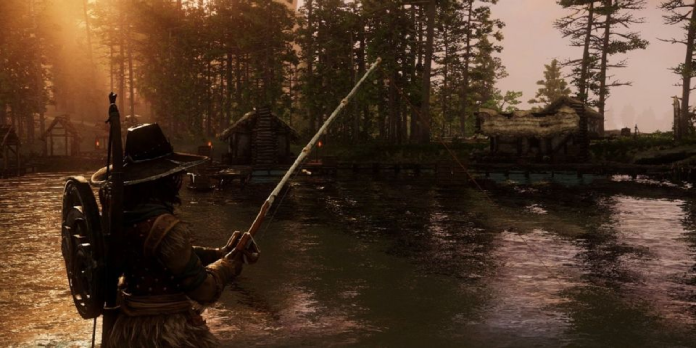 In Amazon’s New World MMORPG, players have begun to set boars against the bots that are beginning to overcrowd the fishing hotspots.

Bots have begun to flood Amazon’s New World fishing hotspots, prompting players to retaliate by turning wildlife animals such as boars against them. MMORPGs and bots are frequently found together. And, even though it only launched last week, New World has already become overrun with cheaters, much to the chagrin of many early adopters.

New World’s fishing mechanic has its own set of complexities. Players will want to equip the best fishing poles, which are buildable and upgradeable with materials like wood, linen, and leather, to get the most out of the experience. Of course, various bait, buffs, and charms will help every user improve their chances of landing a suitable freshwater or saltwater catch. Fishing hotspots, of course, play a big part in your chances of success, so it’s no surprise that bots have infiltrated some of the Amazon role-playing game’s most well-known fishing holes.

Unfortunately, cheaters in New World use bots for farming rare fish and other resources. A Reddit user recently shared a short video of a specific fishing spot where bots constantly flicked their rods. According to GameRant, these bots were programmed to quickly determine whether or not their attempts at attracting rare fish were successful, which explains the constant casting. In the absence of an official solution from Amazon, users have taken matters into their own hands, pitting wild animals such as boars against fishing bots. And, because each bot’s sole purpose is to fish, they lack the necessary weapons to defend themselves.

Why is every fishing spot filled with these nonsense named characters constantly flicking their rods over and over and over? It’s insanely annoying I had to turn the sound off to fish my spot. from newworldgame

This solution and others like it causes significant inconvenience to those who want to hunt and gather resources fairly. Unfortunately, wildlife attacks appear to be the best way to dispatch this cheater until the New World development team releases a patch that fixes the MMORPG’s issues.

Also See:  how to install the google play store on an amazon fire tablet

New World has already proven to be a huge hit for Amazon, surpassing Steam’s concurrent player count in its first weekend of release. Additionally, 913,000 concurrent players were recorded during the game’s first weekend, placing it ahead of Counter-Strike: Global Offensive and Dota 2. It’ll be fascinating to see how long the title can keep up its momentum.

On PC, New World is now available to play.