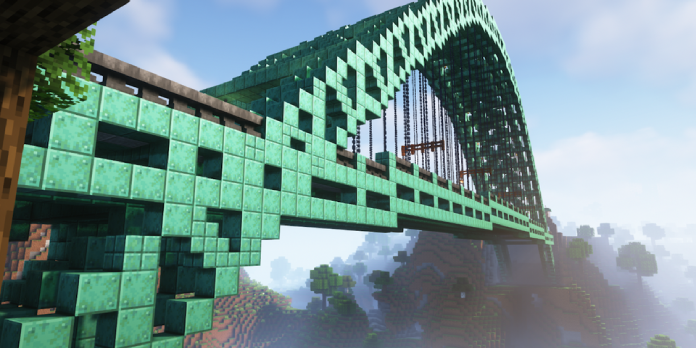 A competent Minecraft player has built an incredible bridge using the copper bricks and valleys in the Caves & Cliffs Update.

A brilliant Minecraft architect has used the new Caves & Cliffs Update to build a gigantic copper bridge. Even though it was first released in 2009, Mojang’s survival sandbox game still receives frequent updates to improve and expand its randomly generated worlds. Caves & Cliffs Update: Part 2 was recently released, and it included several significant enhancements that allow players to explore more realistic and diverse biomes.

Minecraft’s Caves & Cliffs Update: Part 1 was released in June, and it made several adjustments to the game’s tallest peaks and lowest valleys. New mobs have been introduced to provide specific regions more variation, such as goats scaling vast cliffsides and luminescent squids and axolotl swimming around deep underwater. New minerals such as copper and amethyst have also been added to Minecraft, giving players a more varied experience when mining for valuable resources underneath. The second half of the massive update, which was released on November 30, has introduced even more new material. Updates include better world generation, new biomes including Snowy Mountains, and reworked resource generation patterns in Minecraft’s Caves & Cliffs Part 2.

Reddit user Ryan diaz1 has displayed a gigantic copper bridge built across a valley in a fantastic display of Minecraft artistry. The massive structure incorporates two new pieces of content released in the game’s Caves & Cliffs Update. The first portion of the upgrade introduced the bridge’s distinctive green copper blocks, mined deep beneath the game’s blocky surface. Meanwhile, in the recently released Caves & Cliffs Update: Part 2, huge valleys have been added to the game’s terrain generation system. The amazing digital design exactly replicates a real bridge, complete with suspension cables, lights, a guardrail, and even asphalt roads that link to it.

The release of a new Minecraft update allows for an infinite stream of unique builds, and fans eagerly anticipate the next piece of fresh material. The Wild Update is set to arrive in Minecraft in 2022, and it promises to deliver a slew of new features for players to enjoy. Overgrown trees, an adorable new frog mob, and a boat with a built-in chest will all be included in the new mangrove wetlands. Meanwhile, gamers will be confronted with odd new blocks and deadly foes while looking for rare loot in the scary Deep Cities.

Also See:  The Most Completed Games in 2021 Were Resident Evil Village and Metroid Dread

Even though it was released more than a decade ago, Minecraft receives new material for users to explore. The recently released Caves & Cliffs Update introduced a slew of new features, and Ryan diaz1 has taken advantage of them to build a stunning bridge. The structure’s copper blocks give it a realistic appearance, and the vast valley underneath it provides a scenic feeling of purpose. Only time will tell what players will be able to create using Minecraft’s newest tools, as Caves & Cliffs Part 2 was only recently released.

Deathloop patch addresses PC stuttering, but this isn’t the end