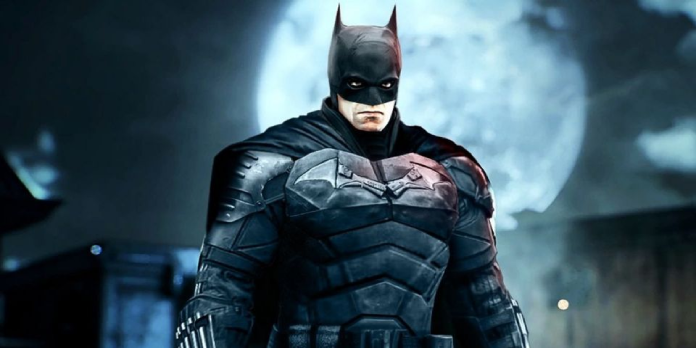 A fan edit for Batman: Arkham Knight shows how fantastic Robert Pattinson’s The Batman outfit would look as a DLC skin for the 2015 game. It’s little surprise that the two worlds mesh so well, given that the Arkham games appear to have influenced Pattinson’s Batsuit design. As many have pointed out in the past, the new movie suit’s chest plate appears to be patterned off the Batsuit from Batman: Arkham Knight.

Players can dress the Caped Crusader in various Batsuits from the vigilante’s 80-year career in Arkham Knight, including an iconic first appearance skin with purple gloves. Various outfits from other mediums also cut, with Adam West, Christian Bale, and Ben Affleck Batsuits all making an appearance at some point. Players have started to worry how well Pattinson’s suit would translate to the interactive experience with the Matt Reeves-directed The Batman feature just a few months away from release.

Freezelizard, a digital artist and Twitter user, just developed an edit that incorporates Robert Pattinson’s Batsuit into the Arkhamverse, specifically Batman: Arkham Knight. The image in question displays the Pattinson suit as an Arkham Knight DLC costume, complete with suitable background key art and a level of realism that is hard to believe. In the following tweet, you can see the artist’s excellent work:

The Batman as an Arkham Knight suit, edit by me. i wanted to try how the Battinson suit would adapt to the game's model, hope u like it!! pic.twitter.com/h7XMr6bP4n

If nothing else, the above fan creation supports the theory that Pattinson’s suit design was influenced by Batman’s outfit in Batman: Arkham Knight. However, it’s unlikely that this particular movie costume will ever be seen in-game. Rocksteady Studios has long since stopped maintaining Arkham Knight with new content and is now focused on its next big release, Suicide Squad: Kill the Justice League.

Arkham Knight, the third installment in Rocksteady’s Batman Arkham trilogy, let unleash hundreds of criminals in Gotham City for a night of turmoil that surpassed any challenge Batman had encountered previously in the series. Scarecrow, Professor Pyg, Poison Ivy, and Harley Quinn were among the Bat’s rogues gallery who went amok while the character faced his most significant defeat. The addition of a crackling voice in the Dark Knight’s brain significantly increased the stakes, making the franchise’s epic end all the more memorable.

Batman: Arkham Knight is now available on PC, PS4, and Xbox One; The Batman, starring Robert Pattinson, will be released in theatres on March 4, 2022.