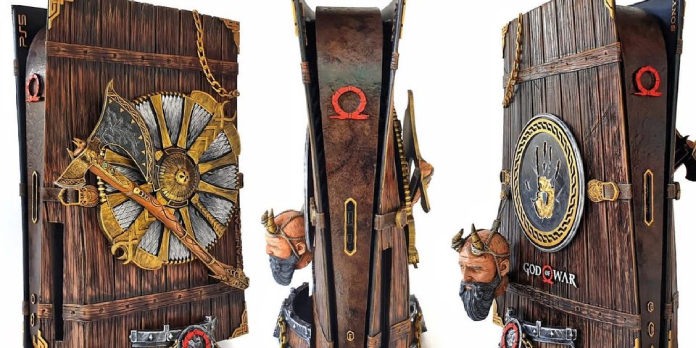 Sony’s newest platform is transformed into a big tribute to Sony Santa Monica’s mythical action game God of War, thanks to a modified PlayStation 5 cosmetic kit.

Sony’s next-generation gaming system debuted in November 2020, with a revolutionary new design that featured enormous white side panels. A PlayStation 5 cosmetic kit inspired by 2018’s God of War equips the new-generation system with God-like decorations. While no official customization options for the console have been announced, Sony recently patented official PS5 faceplates.

Gamers have been attempting to personalise the PlayStation 5‘s design since the announcement of the Sony console’s makeup, notably its distinguishing white faceplates. Alternate faceplates range from basic colour tweaks to full-fledged pieces of art, with many being inspired by the PS5’s famous line-up of exclusive games. On the other hand, Sony has taken legal action against those who create these fan-made gadgets, saying that they infringe on their copyright. However, Sony has received an official patent that would reportedly manufacture and sell their unique faceplates for the PS5. Even yet, bespoke PS5 faceplates are apparently in the works, and these designs may be able to sidestep copyright accusations.

Also See:  After Winning the Gulag, Warzone Pacific Will Allow Players to Keep Their Gun

In the most recent case of PlayStation 5 customization, Reddit user Fan2fanbr has produced a cosmetic kit that pays homage to God of War from 2018. The legendary adventure game is regarded as one of Sony’s best exclusives, and the PS5 kit faithfully carries on that tradition. The Gamer Shield design includes iconic elements from Sony Santa Monica’s epic quest, such as the disembodied advisor Mimir and the legendary Leviathan Axe. One faceplate features Kratos’ Guardians Shield and the axe, while the other features the game’s golden handprint emblem. The entire kit is said to be simple to apply and remove, and the cosmetic device does not appear to interfere in any way with the system’s delicate cooling fans.

I created this kit that you can easily put on and remove from the PS5 whenever you want @fan2fan.br from GodofWar

Sony’s outstanding lineup of console-exclusive games has aided the PlayStation brand’s popularity, and fans frequently pay homage to these treasured titles via console cosmetics. While God of War, released in 2018, follows a father-son duo as they trek through the harsh world of Norse myth, Naughty Dog’s The Last of Us series follows everyday people as they try to survive in a post-apocalyptic America. A Last of Us PS5 skin transforms the console into a decaying metropolitan scene, paying homage to the harsh and gorgeous action genre. The standard white faceplates have been changed into overgrown mossy brick, with the elusive Fireflies logo painted on one side.

Fan2fanbr has turned an ordinary PS5 console into a spectacular tour of God of War’s Midgard to honour an extraordinary PlayStation exclusive. Kratos’ Leviathan Axe and Guardian Shield provide heavenly flair to the creation, while Mimir’s inclusion recalls the game’s deep backstory and often humour. Although Sony may disapprove of the unauthorised modification, Fan2fanbr’s PlayStation 5 cosmetic kit is a beautiful love letter to Sony Santa Monica’s latest adventure.

How to: Fix Nvidia Driver Error Code 3 on Windows 10