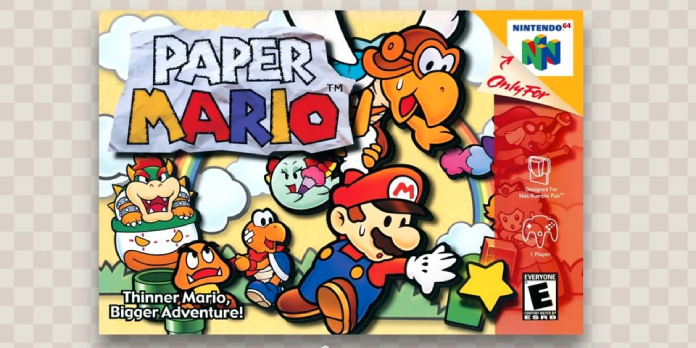 Nintendo has announced that the original Paper Mario from the Nintendo 64 will be released on December 10 as part of the Nintendo Switch Online Expansion Pack.

Nintendo has announced that the original Paper Mario will be released in December as part of the Nintendo Switch Online Expansion Pack. Since its release on October 25, this is the first new Nintendo 64 game included in the Expansion Pack.

The Expansion Pack is a Nintendo Switch Online premium tier that adds N64 and Sega Genesis titles and access to Animal Crossing: New Horizons’ paid DLC. Super Mario 64, Mario Kart 64, Star Fox 64, The Legend of Zelda: Ocarina of Time, Shining Force, Shinobi 3, Sonic the Hedgehog 2, and Streets of Rage 2 were among the games included in the launch lineup. Nintendo has announced that other games, such as The Legend of Zelda: Majora’s Mask, F-Zero X, Mario Golf, Pokémon Snap, Kirby 64, and Banjo-Kazooie, will be released to the service in the future.

Paper Mario is a turn-based role-playing game set in a world where the Mushroom Kingdom’s people are made of paper. The plot follows Mario and many party members as they strive to escape Princess Peach from Bowser’s clutches. The Paper Mario series is recognised for its witty writing, which is aided by the fact that in an RPG, more characters communicate than in platformers or sports games, giving them more opportunities to express themselves.

Fans may be frustrated by the slow pace with which titles are being added to the Expansion Pack, especially in light of the negative reaction to the Expansion Pack’s pricing point. This is to be expected, given the Nintendo Switch‘s anticipated popularity over the holiday season of 2021. Nintendo usually releases huge Nintendo Switch Online games during downtimes in the Switch’s schedule, which is why there haven’t been any new NES or SNES games added to the service in a while, nor are there any Sega games being added alongside Paper Mario. The original Paper Mario is a wonderful first game because it launched one of Nintendo’s most popular RPG franchises, and its gameplay and writing are still strong today.

How to: Fix Forza Horizon 4 PC Controller Not Working

Minecraft Video Demonstrates How Biomes Have Changed Over Time