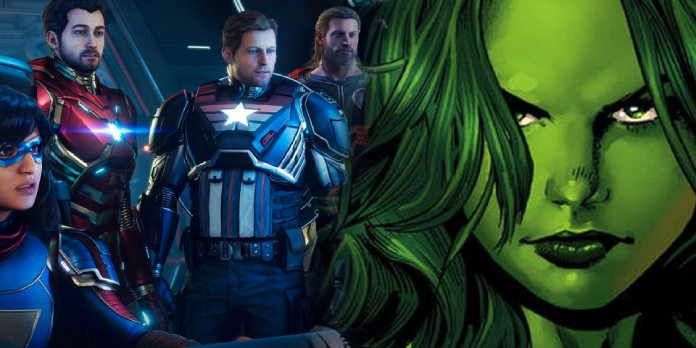 According to a leak, Krizia Bajos will play She-Hulk in Marvel’s Avengers’ forthcoming DLC, which the actor has allegedly confirmed on Twitter.

The upcoming DLC for Marvel’s Avengers will supposedly feature She-Hulk as the game’s next character, according to the actor linked to the story. Since its release in 2020, the Crystal Dynamics title has regularly added new stories, missions, and characters and has just released a new Marvel’s Avengers MCU Black Widow skin.

Following a lackluster launch and numerous fan controversies, the developers of Marvel’s Avengers have worked hard to turn the game around. Marvel‘s Avengers, which focuses on multiplayer, offers a variety of paid cosmetics and microtransactions, which have sparked controversy over their pricing and contents. Along with its pricey add-ons, the game also provides free content to its fans, with the Black Panther – War for Wakanda story DLC impressing this year for those who previously owned the game. Similar additions are likely in the future, whether it’s new story chapters or other characters like Marvel’s Avengers PlayStation-exclusive Spider-Man.

While unconfirmed, a leaker claims that the upcoming DLC for Marvel’s Avengers will focus on She-Hulk. The report comes from Miller on Twitter (via ComicBook), who claims that Krizia Bajos would play Jennifer Walters, a.k.a. She-Hulk. Even though there has been no official confirmation of the report, Krizia Bajos herself tweeted about it, adding a green heart symbol. While Bajos did not confirm the allegation, her statement seems to imply that it is true. Miller didn’t go into any more detail about the rumored DLC. Still, it’s worth noting that they were correct in leaking Christopher Judge as Black Panther’s voice actor ahead of the official revelation, which lends credence to the idea.

Krizia Bajos will be playing Jennifer Walters aka She-Hulk when she appears in Marvel's Avengers pic.twitter.com/u5yinWl8vT

Bajos is no new to AAA games, having previously worked on Halo Infinite, Far Cry 6, and Cyberpunk 2077, to name a few. The actor is also familiar with comic book lore, but it is DC rather than Marvel, as she will play Renee Montoya in the upcoming Gotham Knights. Fan reactions to the rumored She-Hulk DLC and casting have been overwhelmingly favorable, with many eager for confirmation as soon as possible.

It’s unknown how She-Hulk will be integrated into Marvel‘s Avengers or whether the character would get a complete expansion like Black Panther. Because the newly added Spider-Man is only available for PlayStation gamers, Xbox users may get their character shortly. She-Hulk would be a nice fit for an Xbox-exclusive character with her distinctive green complexion, though a complete story campaign would probably be more popular. Fans will have to wait until 2022 to find out what’s in store for Marvel’s Avengers.