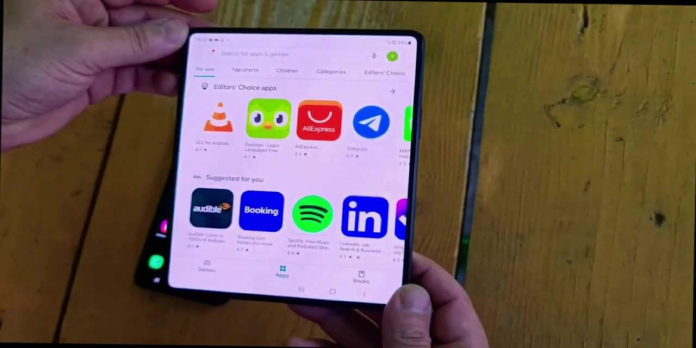 It’s probably safe to assume that we already know almost everything there’s to understand about the Galaxy Z Fold 3 and, therefore, the Galaxy Z Flip 3 by now. Of course, there could be some incorrect details here and there, but the large picture for Samsung’s following foldable phones is just about complete. Of course, we haven’t seen the virtual devices yet, apart from 3D renders and alleged marketing materials. Unsurprisingly, though, a video showing off these two phones has just surfaced, a mere 24 hours approximately initially becomes official.

The two foldable smartphones match those renders that claim to be what the Galaxy Z Fold 3 and Galaxy Z Flip 3 will appear as if. Instead of just dummy models, however, these are actual devices that are presumably the retail version. So while the video doesn’t exactly add anything we haven’t heard or seen before, it does confirm a couple of things.

The most significant detail here is perhaps the Galaxy Z Fold 3‘s much-rumored under-display camera, clearly evident within the video. Or rather, it’s is not apparent, which is that the whole point of the UDC feature. The source uploads a separate video showing that in action, where the under-display camera is nearly wholly invisible.

Also See:  How to Use AutoHotkey to Create Custom Keyboard Shortcuts

The Galaxy Z Flip 3 is additionally shown within the video, which doesn’t exactly have much within the way of spectacular upgrades. However, it does have a dual camera on its back and a more prominent external Cover Display, which is confirmed by this video.

Samsung‘s lawyers are probably scrambling to deal with the company’s leak problem, but it’s far too late for these two. Regrettably, the hands-on doesn’t include what might be the Galaxy Z Fold 3’s most prominent feature, its compatibility with an S Pen.