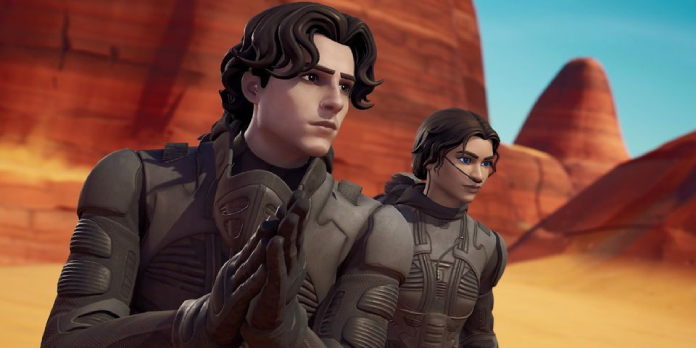 Starting October 19, Paul Atreides and Chani from Dune will be accessible in Fortnite alongside new unique cosmetic items like emotes and gliders.

Following a leak, Epic Games has confirmed that Fortnite will feature Dune-themed skins and accessories in the item shop starting today, October 19, letting players liven things up as Paul Atreides (Timothée Chalamet) or Chani (Zendaya). Fortnite is no stranger to collaborations with feature films, but this is one of the unique examples to appear in the games, as the Denis Villeneuve film isn’t quite as mainstream as previous collaborations like Avengers: Endgame.

The new Dune Fortnite skins leaked ahead of the formal presentation earlier this week, spoiling the surprise for fans. Over the years, Fortnite has collaborated on various marketing campaigns with films, with recent examples including Free Guy and Shang-Chi. The game has established itself as an effective means to sell forthcoming material by reaching a large audience both in-game and online, with the buzz generated by these ambitious crossovers reverberating far beyond the bounds of Fortnite.

Dune has joined the debate as new skins and cosmetics have been added to Fortnite, allowing players to play as Timothée Chalamet’s Paul Atreides and Zendaya’s Chani. Players will be able to use a Dune-themed Ornithopter glider and pickaxes and emote inspired by the upcoming film. In the Fortnite clip below, the two main characters unveiled the new features.

For the premiere of Venom: Let There Be Carnage, Fortnite added Carnage and Venom skins. Although it appears that a growing number of major blockbuster films are hooking in with Fortnite in some manner, this could prove to be a crucial component of Dune’s marketing strategy. While Marvel films have no trouble making money at the box office, Dune poses a greater financial risk. It’s the first instalment of a two-part storey, but Warner Bros. has yet to approve the second instalment, and the 1984 film adaptation was a box office flop. Before committing to an equally, if not more, expensive sequel, the studio is waiting to see how the first picture performs on its large budget.

Also See:  how to create fillable forms in word

It could be crucial for a sequel to target the Fortnite player base to get more people in cinema seats or watch on HBO Max during Dune’s opening weekend. Fortnite appears to be just as much of a marketing vehicle as a video game, as evidenced by its collaborations with franchises like Bad Boys and others. It’s difficult to say whether this is paying off for these studios, but Epic Games’ partners seem to be turning to its game for marketing signal-boosting, so it must be working to some level.

Fortnite is available on all platforms.

The Trailer for Marvel’s Avengers: War For Wakanda Sets Up the...

Genshin Impact’s Own Squid Game Is A Difficult Break