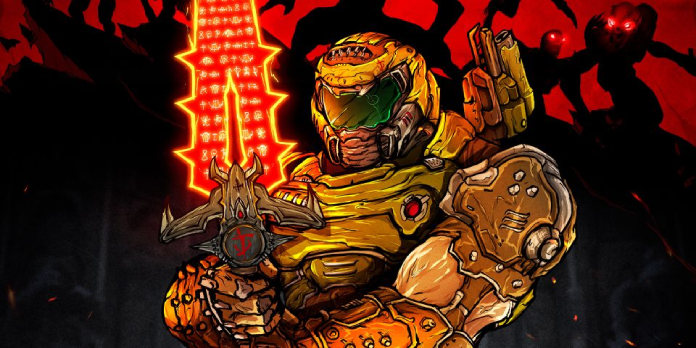 The official DOOM Twitter account recently posted its take on Metroid Dread’s box art to congratulate Nintendo on its release.

With an artistic homage to the new game’s box art – featuring the protagonist from DOOM Eternal, Doom Slayer – the official DOOM Twitter account publicly congratulated Nintendo of America on the official release of Metroid Dread. The two long-running franchises began on opposite sides of 1990, with Metroid’s first installment hitting store shelves in 1987 and DOOM’s first installment debuting in 1993. That said, Metroid Dread was finally released today, and DOOM Eternal celebrated its first year around the sun in March.

Metroid Dread received overwhelmingly positive reviews upon its initial release, with critics hailing the Nintendo title as one of the best of 2021. The positive response comes after months of anticipation for the game’s release, with Metroid Dread topping Amazon’s preorder charts in June – months before its official release. Before the announcement of Metroid Dread, there were concerns about whether Nintendo would continue to invest in Metroid games, even though the franchise has been around for over three decades. However, with the company’s active Metroid Dread marketing campaigns and other upcoming series installments in the works, this is unlikely to happen (both rumored and confirmed).

Bethesda‘s DOOM series recently congratulated Nintendo of America on the successful launch of Metroid Dread in a tweet. “Congratulations to @NintendoAmerica on the launch of #MetroidDread,” the account wrote. While the message was complimentary on its own, the graphic attached to the tweet was a nice touch. The DOOM Twitter account stuck a Metroid-Dread-looking poster with a DOOM twist with a look that was undoubtedly done on purpose.

congratulations to @NintendoAmerica on the launch of #MetroidDread pic.twitter.com/vtunOFHXxc

The heavy-looking combat outfits worn by Samus and Doom Slayer have similar physical attributes and builds, and both series protagonists are similarly armed. As a result, DOOM’s version of the Metroid Dread poster makes a lot of sense and looks very similar to the original. Doom Slayer, like Samus, is positioned in front of a valley of enemies and a red sky. While the enemies in the background of both box art pieces are different, their bright red eyes and dark silhouettes make them nearly indistinguishable. The color scheme of “DOOM Eternal” is identical to that of Metroid Dread.

The gesture is sweet, but it also points to a more entertaining concept: a Samus Aran and Doom Slayer crossover. While it’s unlikely that Bethesda and Nintendo are planning a meet-in-the-middle, Samus and Doom Slayer’s uncanny resemblance would make for an intriguing collaboration. Perhaps Master Chief from Halo could also make an appearance, given that he fits the required aesthetic.

The Nintendo Switch version of Metroid Dread is now available.