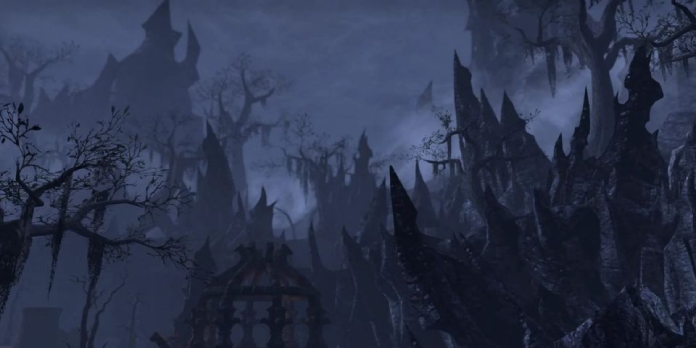 In Elder Scrolls Online, a bug has been discovered that makes Coldharbour’s skies sunny and bright, removing the oppressive atmosphere.

The gloomy skies over Coldharbour become sunny and bright thanks to a glitch in Elder Scrolls Online. The realm is known for its bleak atmosphere, but the glitch allows players to see what Coldharbour would look like if the opposite were true. The brutal, soul-devouring Molag Bal rules over Coldharbour, an Oblivion plane.

The Elder Scrolls Online is the most recent instalment in the long-running The Elder Scrolls franchise, and it’s a departure from the core series in that it’s an MMO similar to World of Warcraft rather than a single-player RPG like the main Elder Scrolls games. It is, however, built around open-world action-RPG gameplay, as is the rest of the series, and ESO takes this to an even larger scale with expansive multiplayer content. The Elder Scrolls is also known for its numerous bugs and glitches. A former Bethesda employee recently shared a story about a bug in Skyrim that involved bees launching a cart into the air.

User Character Paper840 shared an image of Coldharbour afflicted by a glitch that makes the skies bright and sunny in a recent Reddit post. Other players have also noticed the issue. The reason for this phenomenon is unknown, but it has been observed in other realms. The bug was reported in Imperial City in Cyrodil, as well as dungeons like the Banished Cells. Players have also written a variety of methods for resolving the problem, including exiting a building and returning, switching to a different character, or waiting until the glitch resolves itself after a short period.

The world is coming to an end; sunlight in coldharbour… from elderscrollsonline

Because Coldharbour is known for being a dark and unfriendly place, this error is unintentionally hilarious. It stands in stark contrast to the realm’s history and lore, and some players have found this juxtaposition hilarious. This isn’t a new issue; Skyrim is known for its amusing flaws, to the point where some fans of the game look forward to them. On the other hand, others value Coldharbour’s bleak and depressing ambiance and would not want to see the realm without its menacing clouds. Certainly, the glitch would be extremely uncomfortable to witness from this perspective.

Any bugs in Elder Scrolls Online are unforeseen peculiarities in the game, whether players find them amusing. The game itself is extremely large, with vast territories to explore and many DLCs to add to the fun. This November will see Deadlands release, a new Elder Scrolls Online expansion in which players will face a battle against the Daedric Prince Mehrunes Dagon in an epic climax. Players can enjoy An Apocalyptic Situation, a free prelude leading up to the end, until then. Those who appreciate weird glitches will, of course, find something interesting in the new expansion. After all, it’s still a Bethesda game.

The Elder Scrolls Online is available on Xbox One, Playstation 4, PC, Mac, and Stadia.