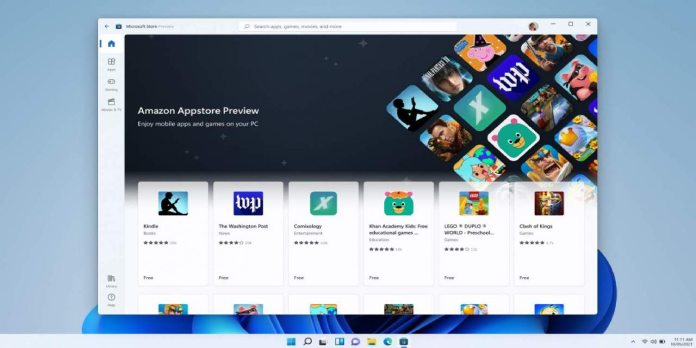 One of the most exciting aspects of Windows 11 for many people is the idea that it will run Android apps. Microsoft is gradually rolling out Android apps for Windows 11, albeit it appears that the feature isn’t quite ready yet. Instead of releasing Android apps to all Windows 11 users today, Microsoft is doing it on a limited scale for a select group of early adopters.

Also See:  MICROSOFT IS FINALLY GETTING RID OF ITS MOST-HATED PRODUCT

Because Microsoft is limiting this test to just 50 apps vetted by Amazon and app developers, Windows Insiders won’t test whatever Android app they want. The goal is to provide a variety of Android apps that can be tested and certified “across a broad spectrum of hardware,” Microsoft also claims that it will utilize the test to check and adjust the Windows 11 minimum system requirements and the Windows Subsystem for Android.

While users can browse Android apps in the Microsoft Store, Android app downloads will be handled through the Amazon Appstore, which is also in preview today. This test includes mobile games such as Lords Mobile, Coin Master, and June’s Journey and reading apps such as Kindle and Comics and instructional apps for kids such as Khan Academy Kids and Lego Duplo World.

These Android apps, according to Microsoft, will take advantage of Windows 11’s new capabilities, such as Snap Layouts. Users will be able to pin Android apps to their start menus and taskbars, and the apps will be incorporated into the Alt + Tab menu and Task view while running. We’ve been assured that additional Android apps will be added as testing progresses, so stay tuned for more information on Windows 11 Android apps from Microsoft.