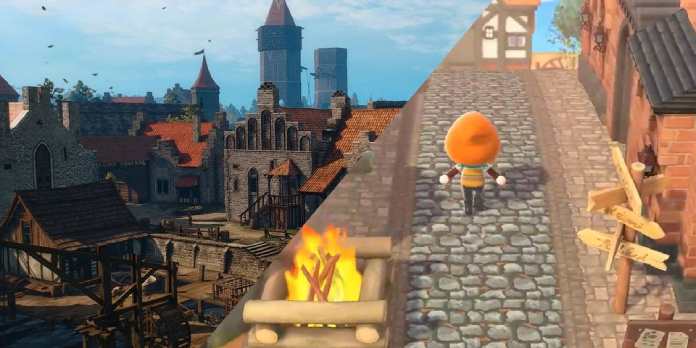 An Animal Crossing: New Horizons player has shared a screenshot of their outstanding island design based on Novigrad from The Witcher 3: Wild Hunt.

An Animal Crossing: New Horizons and The Witcher 3: Wild Hunt fan has revealed their stunning island design, which is inspired by the city of Novigrad from the CD Projekt Red RPG. The user has already replicated the Witcher’s iconic Roach roof joke in ACNH, so this isn’t the first time they’ve shown off their Witcher-themed island.

Animal Crossing provides a creative playground where players may construct their ideal island using various tools and decorations. Extensive city structures have been a popular choice for more imaginative players to bring to life in the game. However, a scarcity of appropriate resources necessitated workarounds to create things like walls and buildings. This changed recently with the introduction of the 2.0 free base game update in November, which brought new decorative pieces such as the Castle Tower and the Storefront, both of which have proven to be popular in creating in-game cities. In addition, animal Crossing had a game update that includes over 9,000 new items, giving players more creative freedom.

ButIDigress79, a Redditor, has shared a new image of his Witcher 3-inspired Animal Crossing island, which includes a busy metropolis modelled after Novigrad. For more Novigrad realism, the designer included unique stone roads, several elements from the recently-released Castle series, and even torches and firepits. The player’s rendition of Novigrad in Animal Crossing brilliantly encapsulates the mood of the CDPR city as they run through their build dressed as Triss Merigold.

Users in the Animal Crossing community have popularised the creation of designs found in other games, TV shows, movies, and even novels since the game’s introduction in 2020. For example, the legend of Zelda designs and scene recreations from films like Spirited Away and even programmes like Netflix’s Squid Game is popular in Animal Crossing. In addition, the recent release of the second season of Netflix’s The Witcher and the anticipated PS5 and Xbox Series X/S Witcher 3 upgrade, due in 2022, may lead to an upsurge in Witcher fan builds.

ButIDigress79’s excellent Witcher 3 island is likely to have influenced many players from the Animal Crossing community. The post had received over 1,000 upvotes at the time of writing, with many people admiring the imaginative island design. One of the most noticeable aspects of their invention is the lack of latency, which is a common complaint of many ACNH designs. However, IDigress79 has provided much of the custom design codes they used for Reddit build, including the cobblestone walkways and marketplace stand designs, implying that future Animal Crossing versions of The Witcher 3 may appear.