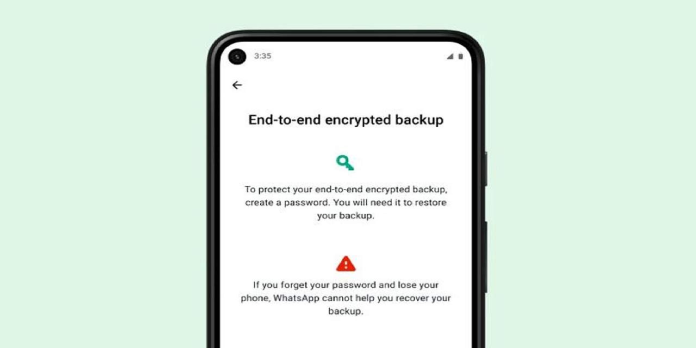 End-to-end encrypted chat cloud backups are now available on WhatsApp, allowing users to keep a copy of their messaging history without jeopardizing their privacy. The backup option is being gradually rolled out to users while the company monitors the experience to ensure any potential issues are addressed before everyone has access to it.

The encrypted cloud backups were first made available to some beta users this summer, but the feature was not available to the general public. That all changes today, as WhatsApp begins a wider rollout, allowing users to store encrypted messaging logs on iCloud or Google Drive.

Also See:  How to Fix Windows 11 Folder Thumbnails Not Showing

This is an important feature because it allows users to access their previous messages even if their phone is lost. Even if you don’t want to keep everything you’ve ever sent, there may be some memorable moments and conversations in the mix that you don’t want to lose, which is where cloud backups come in handy.

Chat logs, video calls, voice messages, text-based, and media-based messages are covered by end-to-end encrypted cloud backups. Users can choose to secure their encrypted backups with a 64-digit encryption key or a password, neither of which is accessible to WhatsApp or anyone else unless you choose to share it.

To use the new feature, you’ll need the latest version of WhatsApp on Android or iOS, though you’ll have to wait a while if you don’t see it right away. Open Settings, then tap Chat > Chat Backup > End-to-end Encrypted Backup to get started. After that, you’ll be asked to create a password or encryption key, and the backup process will begin.