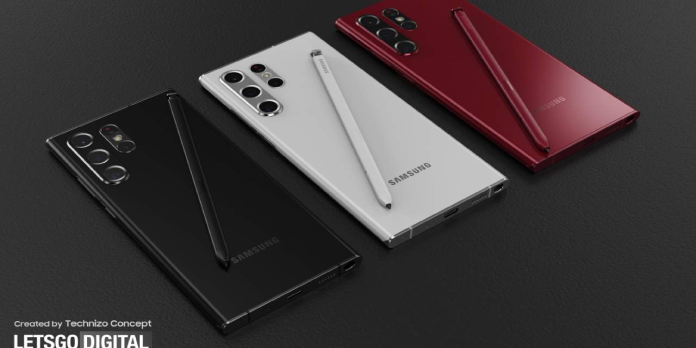 Next year, the Galaxy S22 and S22+ could be complete flops, but the Galaxy S22 Ultra could save Samsung’s bacon. That is if purchasers aren’t too concerned with the appearance of the phone’s camera hump. Given how polarising the Galaxy S22 series’ Contour Cut Camera design was, a change might be in order. But, according to these latest renders, if you don’t like what others are calling the Galaxy S22 Ultra’s P-shaped camera bulge, there’s still hope.

Of course, whether the Galaxy S22 Ultra’s camera bump’s initial design is better than the Galaxy S21 Ultra’s is a matter of personal aesthetic choice. It is, nevertheless, an uncommon design from one of the world’s largest phone manufacturers. However, Samsung has been experimenting with camera design for the previous two or three years, so it’s not impossible that it would try out radical new and unique styles.

However, according to LetsGoDigital, it’s possible that the rumoured P-shaped camera bump won’t be P-shaped at all. It explains that the design was based on leaked dimensions for dummy phones or information for case manufacturers. Those won’t have to hug the camera bump as tightly, and a P-shaped hole around the Galaxy S22 Ultra’s cameras might be the most economical design.

However, the camera arrays on next year’s super flagship could be separated into two “islands,” each running vertically. Its design is more similar to the Galaxy Note 10’s camera, except for a smaller hump on the side. It’s a design that’s a little less scary but yet unique enough to entice folks to take another look.

The renders also reveal a more rectangular frame and flatter edges, similar to the Galaxy Note series rather than the Galaxy S line. So in some ways, Samsung could be aiming for an aesthetic resemblance between the Galaxy Note and the Galaxy Note Pro, especially with a dedicated S Pen silo. But, of course, none of this is official, and if the Galaxy S22 series is set to ship in late February next year, we may have to wait a little longer.