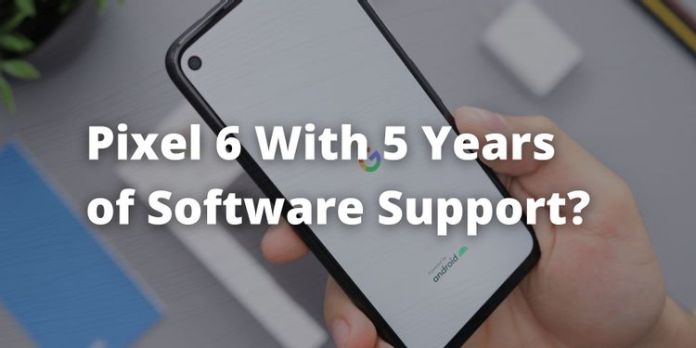 Google’s Whitechapel chipset will power both the Pixel 6 Pro and Pixel 6 Pro.

Google has yet to launch Pixel 5a 5G. However, rumors and leaks surrounding the Pixel 6 series that will launch later in the year are coming thick and fast.

New leaks have revealed the full specifications of the Pixel 6 Pro and Pixel 6 Pro. This leak also suggests that Google will offer software updates for up to five years on its upcoming Pixel phones.

Also See:  Pixel 5 and 4a 5G discontinued, paving the way for Pixel 6 launch

According to leaks, the Google Pixel 6—codenamed Oriel—will feature a 6.4 inch AMOLED display, 8GB RAM, and up to256GB storage. A 50MP primary camera will be located at the rear, while a 12MP ultra-wide lens will be visible. In addition, a punch-hole 8MP camera will be found in the front, powered by a 4,614mAh lithium battery.

Previous leaks revealed that Pixel 6 would include an in-display fingerprint reader, a mono speaker at the bottom, and wireless charging.

The Pixel 6 Pro codenamed Raven will have a 6.71 inch OLED display, 12GB RAM, upto 512GB storage, and a 5,000mAh battery. The triple-camera configuration includes a 50MP primary camera, a 48MP Telephoto camera, and a 12MP ultra-wide. In addition, a 12MP selfie camera will be located at the front.

Both phones will run Android 12 out-of-the-box and be powered by Google’s Whitechapel chip.

According to the leak, Google may offer as much as five years of support for the Pixel 6 series.

The company promises that Pixel phones will receive OS and security updates for three years starting from the day they go on sale. The Pixel 5 (which was first sold in October 2020) is eligible for security and OS updates through October 2023.

Although this is impressive compared to other Android smartphones, it pales compared to iPhones that Apple supports for at least five years. The iOS 15 update will be released later in the year for iPhone 6 and iPhone 6 Plus.

Samsung promises slightly better software support for Android devices with three OS updates per year and up to four years’ worth of security patches.

The leak doesn’t clarify whether Google wants to provide OS updates for up to five years or just software support for the new Pixel 6 line. This would allow Google to release three to four major OS updates, then continue support for the devices for another year with security updates.

Rumors suggest that the Google Pixel 6 series will launch in October. However, Google will launch the Pixel 5a 5G, a Pixel 4a, last year, before that.

How to Roll Back Builds and Uninstall Updates on Windows 10