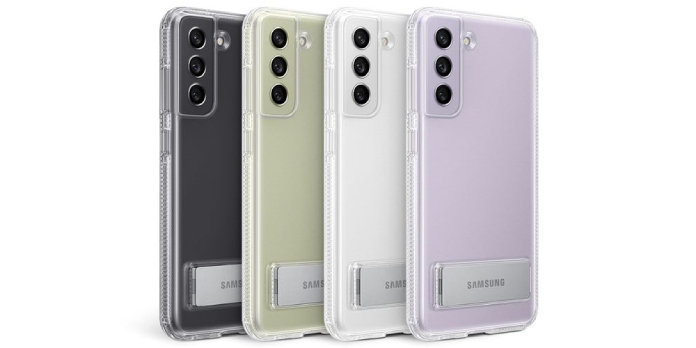 The official cover options for Samsung’s upcoming Galaxy S21 FE have been listed on the company’s website, with four colour options to choose from.

Samsung phones and leaks go hand in hand, and the firm has gotten tired of them, as case renders of the next Galaxy S21 FE have been posted on its website weeks before the device’s formal introduction. The Galaxy S21 FE, also known as the Fan Edition, is one of Samsung’s most eagerly awaited phones, taking over the title of “affordable flagship” from the well-received Galaxy S20 FE. Key specifications, regulatory listings, and even claimed phone mockups had surfaced online in recent months.

The Galaxy S21 FE will essentially be a watered-down version of the Galaxy S21, with a few compromises made to keep the price low. The device’s history has been a rocky one. Reports circulated not long ago that the business was discontinuing the phone due to an ongoing semiconductor scarcity and would instead focus on foldable phones. However, it appears that the idea is still very much alive, and Samsung has now revealed that an official launch is not far away.

What Can You Expect From Samsung’s Next Fan Edition Phone?

According to trustworthy sources, Samsung’s next Fan Edition phone will feature a 6.5-inch Full-HD+ OLED display with a 120Hz refresh rate and a centre-aligned hole punch at the top. A 12-megapixel primary camera, another 12-megapixel sensor for wide-angle shooting, and an 8-megapixel telephoto camera make up the triple camera array at the back. Qualcomm’s Snapdragon 888 SoC is in charge of things beneath the hood, paired with 6 GB of RAM and 128 GB of inbuilt storage.

The Samsung Galaxy S21 FE appears to be a good value for its $699 asking price, with the Google Pixel 6 and the iPhone 13 as two of its main competitors. According to certain rumours, the primary back camera is a 64-megapixel sensor. A 32-megapixel camera will handle selfies and video calling. According to reports, a 4,500mAh battery will power the device and allow 15W rapid charging.