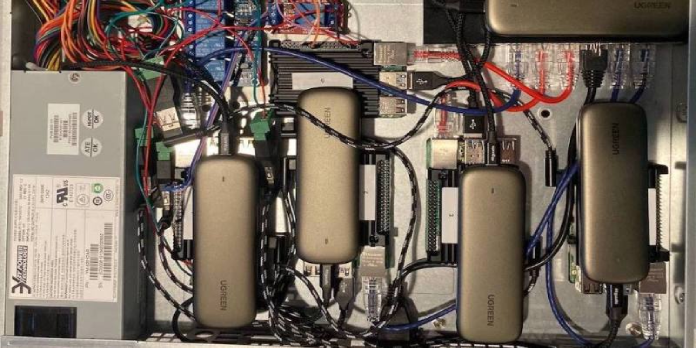 [Paul Brown] wants to require advantage of off-site server colocation services. But the providers within [Paul] ‘s region typically place a limit of 1A @ 120V on each server. So instead of obtaining commercial low-power solutions, [Paul] embraced the hacker spirit and built his server from five Raspberry Pi 4b single board computers.

The task involves a touch bit entirely, just mounting five Pi4s during a chassis and calling it done. An Ethernet switch connects all the modules to the network, and every Pi features a comparatively bulky SSD drive + enclosure attached. Far and away, the foremost annoying part of the assembly is that the power supply and distribution cabling, which is further complicated by remote-controlled power switching relays (one of the computers is devoted to power management and may shut the opposite four modules on and off).

Even if you’re not planning on building your server, inspect the thoroughly documented assembly process and parts list — we particularly liked the USB connector to screw terminal breakout connector that he’s using for power distribution. For all the detailed information, assembly instructions, and photos, we expect a top-level diagram/interconnection drawing would be constructive for anyone trying to know or replicate this project.

There are tons of connections during this box, and therefore the outcome features a messy look-and-feel. But in fairness to [Paul] ‘s craftsmanship, there aren’t many other ways to hook everything together given the Raspberry Pi form-factor. Maybe an outsized and dear PCB or using CM4 modules rather than Raspberry Pi boards could help with cable management? Within the end, [Paul] reckons he shelled out about $800 for this unit. He compares this expense with some commercial options in his writeup, showing some cheaper and more robust solutions. But while it’s going to be cheaper to shop for, we understand that strong urge to roll your own.