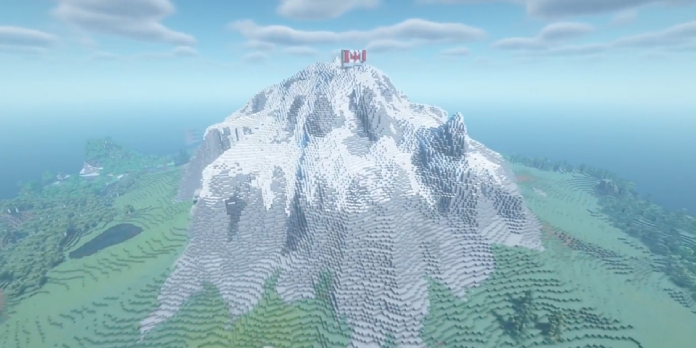 A group of Minecraft players worked together to create a giant custom mountain, which was completed just in time for the game’s recent 1.18 update. Deserts, valleys, tunnels, and mountains are among the biomes found in the survival sandbox game’s randomly created planets. Although the Caves & Cliffs Update: Part 2 modified biomes and improved the terrain creation algorithm in Minecraft, some players are still content to create their own unique landscapes.

Also See:  Google's first wristwatch is rumoured to be an Apple Watch competitor in 2022

The 1.18 update for Minecraft was released on November 30, 2021, and it was the second portion of the Caves & Cliffs update. The expansion for the survival sandbox revamped the terrain generation algorithm, allowing the game’s randomly generated landscapes to flow more smoothly between climates and layouts. Seven brand-new biomes, ranging from lush underwater tunnels to frigid mountain summits, have been introduced to Minecraft, and each one is now strategically positioned among biomes with similar climates. The ore creation method in the game has also been updated, with different minerals now being found at varying depths beneath the surface rather than all being found at the same depth. Many interesting fan creations, such as a large reconstruction of Earth and boat race tracks, were made possible by Minecraft’s new Caves & Cliff’s upgrade.

Reddit user Loquacious Fox and another player made a customized Minecraft mountain in Survival Mode before the release of Caves & Cliffs Part 2 late last year. The hollow landmark, which is topped by a gigantic Canadian flag, is larger and more detailed than any organically generated mountain in the game. Loquacious Fox’s man-made mountain, which stands at 195 blocks tall and is built out of over 170,000 dirt bricks and 100,000 stone blocks, took six months to build. Because it was built in Survival Mode, these supplies had to be gathered by hand, and a single slip from the digital Everest would spell disaster for its creator. Minecraft’s Caves & Cliffs Update: Part 2 was released shortly after the mountain was finished as an official means to improve the game’s peaks.

We finished our custom mountain… Just in time for 1.18. from Minecraft

A large-scale effort like Loquacious Fox’s homemade mountain is one example, while a Minecraft build of Howl’s Moving Castle displays the game’s player base’s dedication. The massive structure faithfully recreates Studio Ghibli’s namesake castle in Mojang’s survival sandbox; however it does not travel through the game’s universe. Instead, howl’s Moving Castle is depicted stepping across a wide river in this blocky recreation, demonstrating the location’s distinctive mobility and massive scale.

Also See:  A Minecraft player recreates the Ecto-1 car from the Ghostbusters

While the Caves & Cliffs Update: Part 2 improved the game’s terrain generation mechanism, Loquacious Fox’s custom-built peak still beats out randomly-generated mountains. With the enormous Canadian flag serving as a lovely cherry on top, the two-player team created a genuinely breathtaking piece of the digital landscape. While the mountain may be hollow, Loquacious Fox and their companion’s dedication during the six-month build is genuine.